There are two different ways by which metallic nanoparticles can be formed.

These are the bottom-up approach and the top-down approach. The two can be distinguished in the sense that while the bottom up method is sourced from scientific research including nanoscience, the top-down is not. The bottom-up approach further comprises of creating nanomaterials and objects within the same nanosphere based on atoms, molecules, and aggregate grouping.

This sort of grouping occurs in a clear and manageable manner, which allows for an increase in the functionality of the structure of such materials. The top-down approach which is sourced from microelectronics has to do with a clear reduction or breaking down of systems in their current state by making existing technologies more efficient. This results in a reduction in the size of the devices into nanoscale aspects.

In terms of the size of objects, both methods are very similar. Both approaches tend to converge in terms of the size range of objects. The former approach, however, tends to be more abundant based on the type of material, design varieties, and nanometric control, while the latter approach only makes the acquisition of materials of more importance, however, control may not be as strong.

When it comes to the synthesis of metallic Nanoparticles, two distinct approaches are utilized. The first is the top-down strategy and the second approach is referred to as the bottom-up strategy. While the former deals with the reduction in size of current technological devices, the latter performs an opposite role, which is building of even more complex molecular devices on an atomic arrangement.

While the top-down approach is beneficial in the production of technological structures in a far reached order and for connecting macroscopic devices, the bottom up is suitable for the production and arrangement of short-range order at the nanoscale aspect. The combination of both strategies is expected to form the best integration of equipment for nano-based fabrication.

Furthermore, the top-down technique is built up for architectural structures at the micrometer scale (um). The bottom-up strategy is also built up for bringing small collections of atoms together measured in nanometers (nm). What is left is to integrate both approaches to create elongated forms at the nanoscale.

The commonest form of the top-down approach of fabrication is the lithographic technique that utilizes enhanced visual sources of a short wavelength. One main benefit of the top-down technique in fabrication of joint circuits is the fact that all of its parts are created and structured in an orderly form so that no further assemblage is required. The high level of polishing makes visual lithography developed especially in the production of the micro-electric chip with the wavelength reaching a level below 100 nanometers (going by the traditional method).

On the other hand, the sources of shorter wavelengths like intense UV and X-ray, are created to permit the techniques for printing lithography to attain a level between 10-100 nanometers. Beams like the electron lithographic beam make provision for model reaching 20 nanometers. In this technique, the model is stated by flushing a finely patterned electron beam across the surface. Other mire concentrated ionized beams are utilized for the direct processing and modeling of wafers with a lesser effect compared to electron beam lithography.

Printing methods of a mechanical nature, also known as the nanoscale imprinting, stamping, and molding— expands to cover small measurements of 20 to 40 nanometers. Though the details differ, the main aim of this is to create a massive "stamp" by utilizing a high pixel method like the electron beam lithography thereafter adding the stamp or the following ones to the surface layer, thus, producing a model. Each variant comprises the coating of the surface layer of the stamp with the "ink" and then emptying directly on the surface of the stamp's model. Given an example, the model under control of a molecule monolayer can be obtained successfully by depositing the ink directly on the coated surface. Using another technique, the stamp is utilized for the purpose of mechanically pressing the model to the tiny layer of the element.

Typically, the surface layer is a polymeric element that has been patterned for molding by heating during the stamping process. Etching of plasma is then used for masking under the stamped layers; polymers are subsequently removed, while a nanoscale lithography model remains on the surface. Relief models are equally formed from photoresist on a wafer by visual or electro-beam lithography and then emptied on a watery precursor. The effect of this is a solid rubber-like substance that can be easily detached and utilized as a stamp. They can be utilized in any of the ways produced above. A distinguishing feature of the latter technique is the flexibility of the stamp. 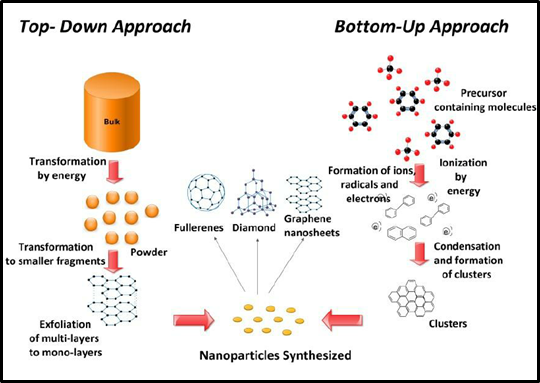 This has to do with metal evaporation through heating and then condensing of the obtained vapor for the purpose of obtaining nanopowders. This method is based on the pressure caused by vaporizing the metal, which is its capacity to vaporize depends on its chemical strength. The surface oxidation Fe, Ni, Co, Cu, Pd, Pt equally create sufficient steam through radiation and inductive heating (1200 and 2000 degrees), respectively. A certain amount of the material is made in the laboratory.

Oxygen (A1, C8, T1, Zr) and refractory metals ( with low pressure in vapor, Mo, Hf, Ta, w) demand greater modes of heating. An example is electron bombardment heating of 3000 degrees and combined with electric arc (3000 and 14000 degrees). If the atmosphere in which the metallic elements are placed is reactive (oxygen), the effect of this would be oxidation of the nanoparticles. The challenge with this process is the loss of control of the nanometric size.

The powders are derived by swift cooling of the escaped vapor, making sure the formation of a huge number of nanoparticles, then restricting their growth and other processes. The technique is particularly used in factory production of ceramic and metal nanopowders and production is made in very large tons a year. The nanopowders are prone to fire and explosion in the air.

The method is easy and effective in the synthesis of nanopowders. It is produced by a form of exchange between the release of carbon dioxide laser and the movement of reagents. The energy current between the two leads to a quick increase in temperature in the reactive zone by arousing the vibration degrees of molecules. There is a disconnection of reactors and a flame that manifests where the nanoparticles are produced and then go through quenching once the flames disappear. The powders are deposited where they will be obtained.

The above technique is an easy way for particle synthesis of 15 – 20 nanometers at 100g/h. One of the benefits of this technique is the flow of reaction. Other benefits are high level of purity, excellent chemical and physical properties. Many nanopowders have been formed through this process.

Through the use of irradiations, nanoparticles can be formed in an original manner. The technique is hinged on the following:

The features of energy production by heavy ions facilitators including GANIL, which introduces local changes in the material in a circumference of 10nm around the ion). The method is suitable in the production of polymer membranes nanopowder. To achieve a ‘matrix’ production, the material can be developed in the membrane pores of the polymer; irradiation makes the attainment of mass possible. 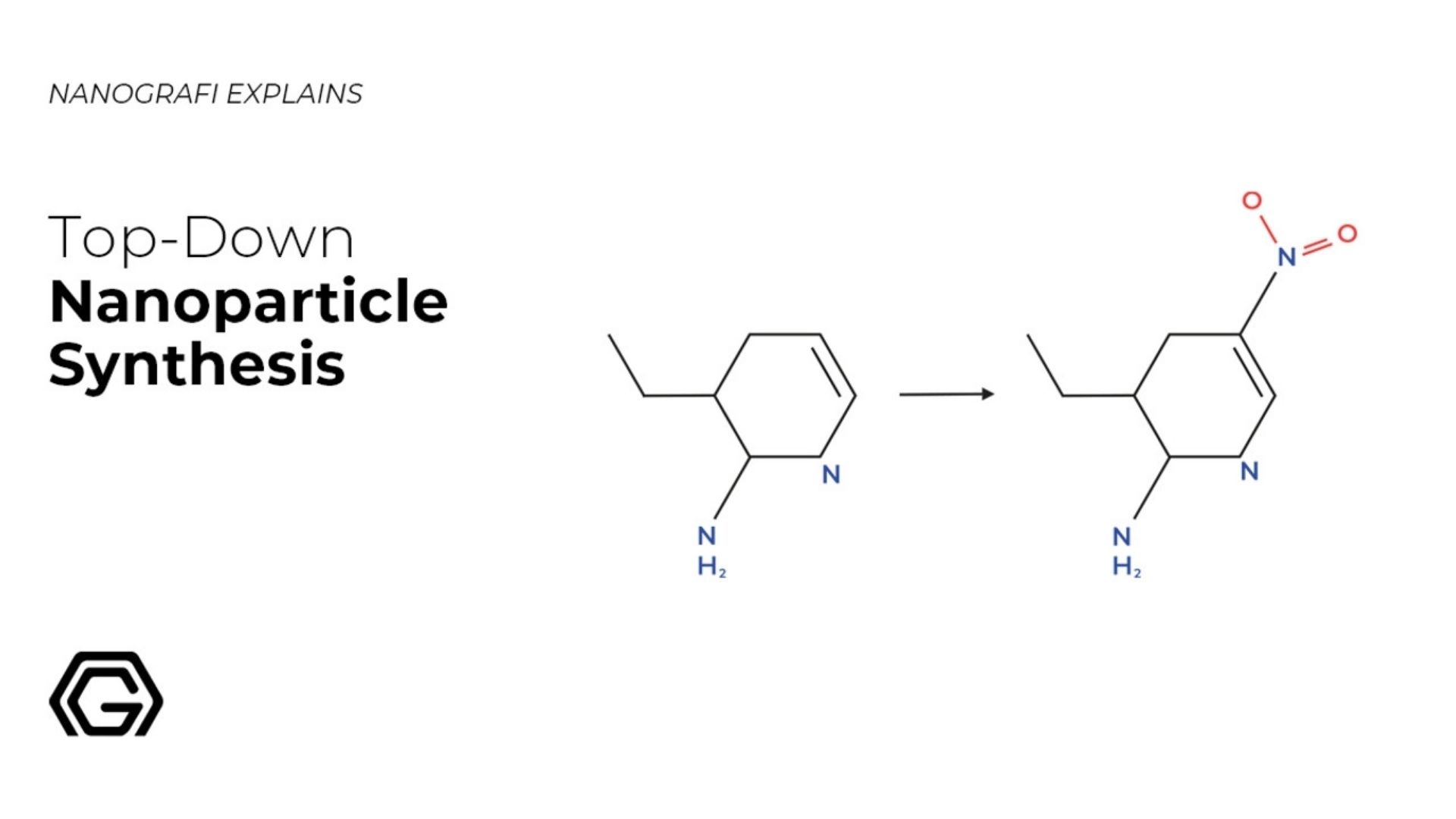 The bottom-up approach utilizes physical and chemical processes that function at the nanoscale to integrate main components into bigger structures. A reduction in unit size, the approach yields a relevant consummation to the top-down approach. Biological systems provide a motivation for this approach in which natural forces of life harness their chemical counterparts to produce the structures. Although, scientists are working to produce the same forces as nature to self-integrate into bigger structures.

Gold-palladium alloy nanoparticles which were based on carbon treated with acid and breaking down hydrogen peroxide are formed from the combination of white hydrogen and red oxygen when disallowing unwanted decay.

This approach has been used in the production of nanoparticles from condensation to coalescence of atomic vapors and liquids, respectively.

This allows the production of nanomaterials from alkoxides or colloidal based solution. They take the form of monoliths, crystallized nano pigments, and thin layers. They are centered on reactions in polymerization. The three types of this are sol-gel, metal alkoxide, and pechini.

The sol-gel method focuses on the growth of chemical compounds in the solution. Following movements between the species and liquid, the sol is changed into some sort of three-sided channel increased in the solvent. The process is then frozen and the sol-gels are transformed to deformed solid material by the removal of liquid from the air-gel or by evaporation

One benefit of the process is the ability to manage the size and oneness of the material spread-out. They make the production of large parts of fibers possible. But, one main disadvantage of the technique is that the precursors are too pricy with very low gain; low weigh products and very dangerous to human health.

b. Supercritical Fluid with a Chemical Reaction

The main goal of having a chemical conversion in a supercritical solvent is to consistently improve the physical and chemical processes of the precursors by improving the temperature on small mediums as well as the pressure. This control allows easy control of the chemical reaction. The method permits the production of divided materials of inorganic nature, such as oxide metal and nitrate.

Thus, two basic techniques exist for the production of metallic nanoparticles which are: ‘the top-down technique (a division of large chunks of material to produce the requisite nanostructure) and; the bottom-up technique which entails the integration of individual atoms and molecules into wider nanostructures.