Graphene is a carbon allotrope which was discovered by scientists and researchers some years ago. Ever since it has come into existence and has been discovered, it is providing plenty of benefits to all the humans around the world.

It is because of the spacious properties and colloidal characteristics that graphene is being targeted for greater and better purposes which are all very useful and beneficial.

Graphene spintronics is one of the fields in which graphene is progressing rapidly. It is an extensive branch of technological uses and advancements of graphene. Carbon atoms-based single layer (monolayer) is known as graphene, the atoms are bound tightly in a hexagonal honeycomb lattice. With 0.142 nanometers molecular bond length, it is a carbon’s allotrope in sp2-bonded atoms plane form. Graphite is formed from the stacking of graphene layers on each other’s top with a 0.335-nanometer inter-planar spacing in between, they are held with each other by van der Waals forces. Van der Waals forces can be overcome during graphene’s exfoliation from graphite.

Having a thickness of one atom, the thinnest compound, and the lightest material known to a man is graphene (1 square meter with a weight of 0.77 mg). At room temperature, graphene is the best conductor of heat. It is the strongest compound, as compared to steel, it is 100-300 times stronger, having 130 GPa tensile strength and a 1 TPa Young modulus. Graphene is the best-known electricity conductor (mobility values of the electron is more than 200,000 cm2V−1s−1). Graphene has other notable characteristics, across the spectrum’s near-infrared and visible parts, its uniform absorption of light (πα ≈ 2.3%), and in spin transport, its potential suitability for usage.

After helium, oxygen, and hydrogen, the 4th most abundant element (by mass) in the universe and the 2nd most abundant mass in the body is carbon, making a chemical basis on Earth for all known life, rendering graphene as a sustainable and an eco-friendly solution for applications of almost limitless number. Since graphene has been discovered, there has been an explosion in the number of applications within various scientific disciplines. Huge gains have been made specifically in the magnetic, chemical, and bio-sensors, high-frequency electronics, photodetectors of ultra-wide bandwidth, and generation and storage of energy.

Chemical vapor deposition produces graphene which will make a cornerstone of the biological, chemical and other types of sensors of the future that are based on graphene. The material’s 2D nature offers intrinsic benefits for applications in sensing as all of the volumes of material act as a sensing surface. Also, remarkable mechanical strength, electrical and thermal conductivity, low cost, and compactness are provided by graphene. Low cost is important for competing in the crowded sensor market.

Due to the meeting of valence bands and conduction of graphene at Dirac points, graphene is a zero-gap semiconductor. Divided into the two non-equivalents sets of three points, the Dirac points are six locations on the Brillouin zone's edge in momentum space. K and K’ are the two labeled sets, giving a vally degeneracy to graphene of gv = 2. Generally, Γ is the primary point of interest for traditional semiconductors, where zero is the momentum. Other condensed matter systems are separated from it by four electronic characteristics.

Although, if the in-plane direction is confined but not infinite, then the electronic structure would alter, known as graphene nanoribbons. The bandgap would remain zero, even if it’s zig-zag, but will be non-zero if it’s armchair. The hexagonal lattice of graphene can be viewed as the two interleaving triangular lattices. This standpoint was used for calculating the structure of the band successfully for a single layer of graphite through the usage of a tight-binding approximation.

The permittivity of graphene changes with frequency. Roughly, it is 3.3 over a range from microwave to millimeter-wave frequencies. Combined with the capability of forming both insulators and conductors, this permittivity, means that theoretically, electrical energy can be stored in large amounts by the compact capacitors that are made of graphene.

In the 1980s, spintronics emerged concerning electron transport phenomena that are dependent on the spin in solid-state devices. After spin-polarized electron injection's observation to a normal metal from a ferromagnetic metal by Silsbee and Johnson in 1985. The scientific discovery of giant magnetoresistance in the thin-film structures has been the foundational steps of the spintronics field.

The structures of thin-film are composed of alternating non-magnetic and ferromagnetic conductive layers. For controlling the device’s magnetoresistance, the spin degree of freedom that is transferred over the nanoscale distances was used but in order to use that, the requirement was the usage of different types of non-magnetic and magnetic semiconducting and metallic materials, leading to a significant technological effect in magnetic field sensors, which are used for reading the data in microelectromechanical systems (MEMS), biosensors, hard disk drives, and magnetoresistive random-access memories (MRAM). After the spin-transfer torque effect’s discovery, a second revolution is being witnessed now in the spintronics field, permitting the control of magnetization with electrical current.

Graphene, which is a 2-dimensional carbon membrane with a thickness of one atom has attracted scientific experts in great amounts focusing on a diverse, large list of remarkable physical characteristics and this material’s unique applicative potential. In the start, Graphene spintronics was envisioned as a promising direction for innovation and work, owing to the combination of the massless Dirac fermions remarkable electron band structures, weakly sensitive to backscattering and at room temperatures, traveling over very broad distances at very high speed.

Also, in sp2 carbon, the weak spin-orbit coupling (SOC) suggests that the electron spin should be unaffectedly carried over unknown distances, making likely practical applications of lateral spintronics. Such huge expectations were echoed initially by pioneering works. At room temperature, graphene’s potential for the transportation of spin signal over tens of micrometers has been recently confirmed in the latest experimental results. One of the Graphene Flagship consortium’s fundamental topic is Graphene spintronics.

Graphene Spintronics Work Package’s (GS-WP) global advantage is that the task force is for establishing the ultimate technological and scientific potential for spintronics of graphene and materials that are related to graphene. In graphene spintronic devices, it targets detection, transport, spin injection, and also demonstrates spin manipulation and spin gating. Realizing operational devices for processing and storing information by engineering the transformation of material and architecture of the device is the ultimate goal. 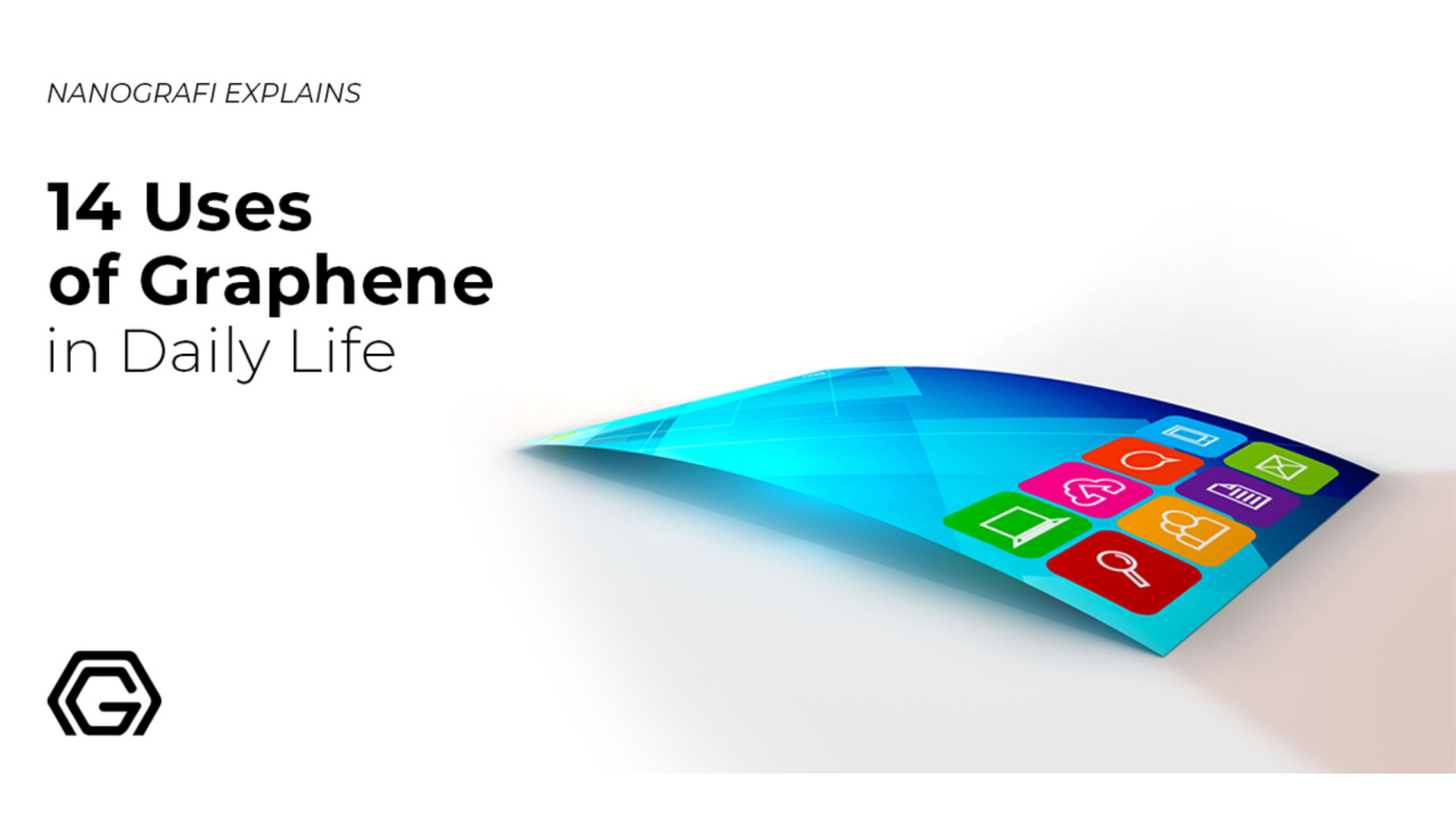 To get more information about uses of graphene,

Commonly, local and nonlocal are the two different measurement types that are used for performing electrical spin injection into spin channel materials, for instance, graphene. In between the E1and E2 electrodes, a source of current is applied for the nonlocal measurement. E2 acts as a spin injector because of the state's spin-dependent density at the Fermi energy in a ferromagnetic (FM) metal.

The spins in graphene underneath E2 can diffuse in both directions after spin injection, can diffuse toward E3 (as a spin current without charge current), and E1 (as a spin current with charge current). Voltage measurement across E3 and E4 detects the spin, E3 (FM) being the spin detector. It's called nonlocal measurement since voltage probes lie on the outside of the charge current loop, allowing the voltage to measure the spin density at E3 coming from the pure spin current of spin-polarized electrons' diffusion. The E2 and E3 magnetization configuration, anti-parallel, or parallel to each other determines whether the measured voltage (VNL) is negative or positive.

The nonlocal spin signal is the major difference between these two voltages, often transferred to units of resistance by dividing the injection current out (ΔRNL = (VNL P - VNL AP)/Iinj). In the usual sense, nonlocal resistance (RNL = VNL/Iinj) is not resistance, instead, it's a four-terminal resistance capable of having negative or positive values depending on the spin density's polarity in graphene. Ideally, E1 and E4 electrodes are nonmagnetic but sometimes, the same electrodes are FM for simplifying the process of device fabrication.

2. Magnetic Moments from Defects and Adatoms

Both the basic technological and scientific standpoints showed a huge amount of interest inthe option of making graphene to be magnetic. The d or f electrons comprise graphene scientifically so the formation of the magnetic moment would be non-trivial.

Graphene can be made magnetic but it can technologically give an increase in high Curie temperature diluted magnetism and helps in meeting the requirements of the magnetic information storage density by the production and formation of 2D ultimately thin magnetic materials. The pristine graphene is very diamagnetic. The Induction of magnetic ordering or just magnetic moments is a very important first step. There is a hope of having tunable magnetism which is capable of being changed by functionalization, doping, or gating.

Due to heavy adatoms (3d, 4d, and 5d elements), light adatoms (H and F), vacancy defects, coupling to molecular doping, and ferromagnetic substrates, there have been a lot of experimental and theoretical studies of the magnetic moment in graphene. The formation of magnetic moments at graphene edges is also predicted. Also, if the report is confirmed of room-temperature ferromagnetism in hydrogenated epitaxial graphene on SiC52, it is going to be a significant step towards applications of graphene in magnetic storage. The focus in this article is on the defect induced and light adatom (F and H)-induced magnetic moments in graphene. The localized moment’s existence is theoretically explained often as a Lieb’s theorem consequence, derived for a half-filled single-band Hubbard model60.

According to this theorem, the ground state has magnetic moment μB |NA-NB| on a bipartite, NB and NA being sublattice sites numbers. In the π bond, a magnetic moment is made by creating a vacancy or removing a site effectively by placing on an adatom, at least σ and π bands are not strongly coupled by the defect.

Graphene being a very useful allotrope of carbon is now being highly used in the technological field of spintronics. This involves the use of chemistry and physics relationships and how they are incorporated in the field of spintronics. These are an essential key point in mechanical and electronic science. Furthermore, scientists are continuously working to establish such practices in which spintronics and their mechanism will be more highlighted so that more part of our population can benefit from it.