Molybdenum, with the atomic number of 42, is silvery-gray transition metal but not a naturally occurring one. It’s discovery dates back to the late 1770s through isolating from its various oxidation states found in minerals. Metallic molybdenum ranks the sixth element with the highest melting point (2623 °C) forms highly stable and hard carbides in alloys. This metal is poorly soluble in water, whereas it produces molybdate (MoO2-) in contact with water and oxygen and becomes nearly soluble. The high melting point and stability of molybdenum have made it a commonly used metal in high-temperature and high-pressure applications as catalysts and pigments, in high-strength and super alloys as well as steel alloys. Molybdenum, as a cofactor in enzymes catalysis, is a component of molybdenum-bearing enzymes most commonly used for breaking the chemical bonds of atmospheric nitrogen in a process called biological nitrogen fixation.

MoS2, as a member of 2D materials, is one of the most commonly regarded compounds of molybdenum with a lot application in science and industry. This graphene-like 2D material is a qualified semiconductor with a band gap of 1.8 eV. Molybdenum sulfide’s remarkable bandgap is perfect match for graphene with no bandgap making a combination for the new generation of 2D materials 1.

What is Sputtering Target

Sputtering, a technique in physics and a naturally occurring phenomenon in space, takes place when the surface of a solid material is bombarded by high-energy particles a gas or plasma with the subsequent ejection of microscopic particles. The sputtering techniques are widely used to create an extremely fine layer of a particular metal on a substrate, conduct analytical experiments, perform etching at practically precise level, manufacture thin films of semiconductors, optical devices coatings and nanoscience. Technically, when incident ions with higher energy collide with target atoms on the surface of solids, they exchange momentum triggering collision cascades in the adjacent particles. The collision cascades with energy greater than that of the surface target binding energy, an atom is ejected from the surface. This ejection of an atom is called sputtering. The high energy incidents ions are created by particle accelerator, radio frequency magnetron, plasma, ion sources, alpha radiation from radioactive materials and solar wind from space. Among the sources mentioned above, the radio frequency magnetron is used a lot to deposit two-dimensional materials in glass substrates. This is used to study the effect on thin films with an application in solar cells 2. Two-dimensional molybdenum ditelluride (MoTe2), which shows polymeric behavior, also has applications as high-performance transistors, semiconductors in phase-change memory and spintronic devices 3.

Sputter-deposited thin films of molybdenum are getting more and mor attention in metal gate field-effect transistors and silicon-based metal oxide conducting devices due to their low resistance and high melting point. Mo films have been deposited successfully on steam-oxidized Si wafers taking the advantage of DC magnetron sputtering technique in argon plasma. The electrical resistance of Mo films deceases the oxygen contamination rate when higher amount of Mo is deposited. This is as a result of the increase in the negative substrate bias and the rate of film growth. Therefore, the tension stress changes to compression in thin Mo films when the amount of oxygen goes up.

Read Also About Aluminum Sputtering Targets and Their Applications

Molybdenum thin films are used as decent choices for the interface if CuInSe2 (CIS) and solar cells based on gallium alloys which is due to stability at the temperatures that the processing goes on and the resistance to Cu and In-based alloys with low contact resistance to CIS. The increase in the quality of CIS film orientation, morphology and grain size is remarkably influenced by sputtered Mo films. According to studies conducted on the structural, morphological and optoelectrical properties of Molybdenum sputtering targets, samples exhibit considerable electrical behavior, whereas low radio frequency power is needed to keep the stresses away and achieve practically packed structures. Molybdenum sputtered thin films have also been deposited by DC sputtering magnetron and S-gun electrode configuration. Relying on this, low resistant Mo thin films was generated using lowered partial pressure of argon and increased glow charge power 1.

Molybdenum sputtered thin films coating has been carried out on a number of metals like copper too. There are different molybdenum coatings which have different resistivity and chemical deposition quality gained by sputtering. Molybdenum sputtering targets are among the major interests in electronics and IT industries with applications in memory devices LCDs, electronic devices integrated circuits and remote controls. In display industries including LCD manufacturing, molybdenum sputtering targets are used to improve the quality of the picture and the technology is referred as thin film transistors liquid crystal display (TFT-LCD).

Thin film sputtering is an efficient technique to coat thin layers on the surface of metals, glass and other substrates in order to improve the electrical resistance as well as conductivity. After the successful achievement of two-dimensional materials and their versatility, sputtering has been widely used for coating purposes. Molybdenum sputtering targets are a capable area in the coating industries regarding the thermal and electrical resistance of Mo and the precise coating provided through sputtering. 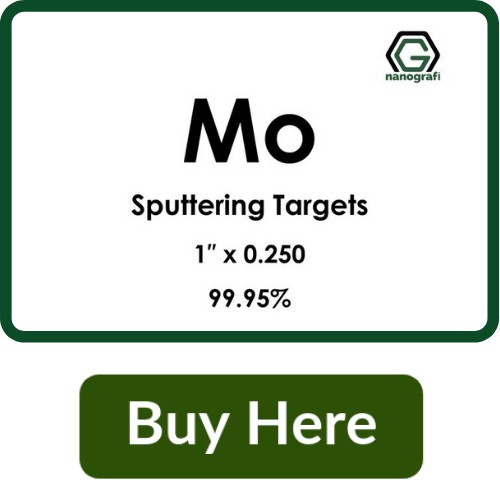 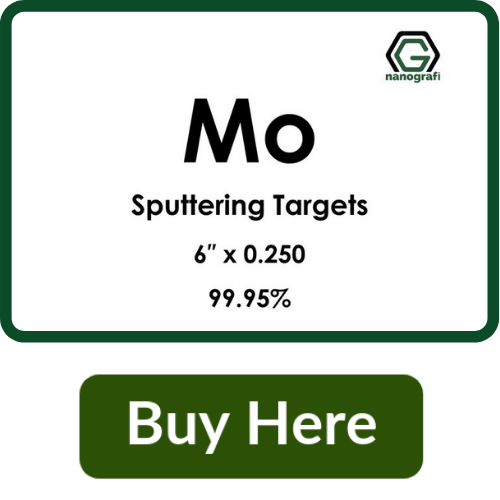