Fullerenes are the allotropic form of carbon and a closed convex polyhedra, composed of an even number of carbon atoms. The name fullerene originated from that of Richard Buckminster Fuller (1895-1983), an American engineer, architect, inventor, and writer, known for having discovered the structural principle of tensegrity, it is the property of a structure that stand by the forces of tension and compression. Fuller is also known for his works on the synergetic, his participation in the Gaia hypothesis, especially as creator of the architectural concept of the geodesic dome was of utmost importance. The fullerene molecules of carbon atoms are arranged in a regular six tops- and pentagons, that make up the surface of the sphere or ellipsoid. Fullerenes have multiple types but the most renowned forms are C60, C70, and Fullerenols because of its important uses. Therefore, this article aims to discuss these three types of fullerenes and their applications in different sectors.

Fullerene is a compound of carbon. In October 1996, the Nobel Prize for Chemistry was awarded to researchers Harold Kroto, Robert F. Curl and Richard E. Smalley for the discovery of fullerenes. The fullerene receives its name from the architect Buckminster Fuller, who designed homes in the shape of a geodesic dome based on pentagons and hexagons, sometimes even referred to as "buckyball". There are three important types of Fullerenes: C60, C70, and Fullerenols. This article aims to discuss these three types of Fullerenes and their uses.

In 1985, Professors Kroto and Smalley were conducting experiments on the conversion of gaseous carbon into particles (soot), a phenomenon that occurs in the stars. During the experiment, they found new stable structures of which the most abundant was a molecule C60, which constitutes a new form of carbon, together with it the C 70 was obtained to a lesser extent.

In C60 each carbon atom is attached to three other atoms using sp2 orbitals with an electron in each orbital. The fourth valence electron of each carbon would be in an orbital p perpendicular to the spherical surface. In this way, the orbitals overlap forming a continuum of orbitals with electrons p inside and outside the sphere in the same way as it takes place in Benzene with the six p electrons that give it the aromatic character. This means that we can consider fullerenes as an aromatic and stable sphere.

The structure of the C60 is similar to that of a soccer ball. It is shaped like a truncated icosahedron with 60 vertices, in each of which is carbon. It has 32 faces, of which 12 are pentagons and the remaining 20 are hexagons, in addition each pentagon is surrounded by five hexagons so that two pentagons cannot be adjacent to each other, but the six links of each hexagon are alternately fused to three Pentagons and three hexagons. 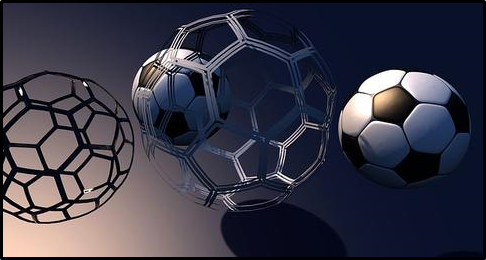 The structure of the C60 is similar to that of a soccer ball.

As for the chemical behavior of this type of compounds, even though they are not aromatic in the sense of benzene, they experience double bond addition reactions (they cannot undergo substitution reactions since they do not have hydrogens). It is also able to react with chlorine at higher temperatures (> 300 ° C).

It is important to keep in mind that the C60 carbons are equivalent (as in benzene) but not the bonds. The C60 has two types of links, links 6-6 shared by adjacent hexagons and links 5-6 shared by a pentagon and a hexagon. The links 6-6 are shorter (1.39 A) than the links 5-6 (1.43 A) and are more similar to the double bonds whereby most of the additions are carried out on a link 6-6.

The importance of the discovery of these types of molecules is that it opens a new field of possible applications in the elaboration of new types of polymers, superconductors, structures with metals or with other atoms trapped within these carbon clusters, as well as new catalysts, pharmaceutical products, and other possible industrial applications. In the midst of other exciting applications must be emphasized the electronic battery. The basis of these Batteries is lithium cathodes. C60 fullerenes may also be used as additives for synthetic diamonds high-pressure methods. Fullerenes may also be used in pharmacy for the creation of new pharmaceuticals. In addition, fullerenes found use as additives in fire retardant paint.

C70 fullerene is the last of the three allotropic forms of Carbon after diamond and graphite. The molecule of fullerene that consists of 70 atoms of carbon is known as C70 fullerene. The ‘C’ in code number (C70), associated with fullerene denotes the atom of carbon and the number ‘70’ denotes the numbers of atoms present in a single molecule. C70 fullerene has a closed, hollow fused-ring structure that looks like a cage. The overall structure of C70 fullerene resembles a rugby ball that is why they are often and commonly called ‘Bucky Ball’. These ‘Bucky Balls’ are interconnected with 12 pentagons and 25 hexagons, in which, the atom of carbon is present at each Hexa- and pentagon’s vertices, with a bond at each edge. A single atom of Carbon is attached to the other three adjacent Carbon atoms, bonded with single S and two P orbitals (sp2 hybridization), which makes them stronger than the original ones, making them capable of making even stronger bonds. These formed molecules can undergo a variety of chemical reactions by accepting or donating an electron/s instantly.

C70 fullerene is a granular powder physically, dark brown in color. When sublimed, changes its appearance to needle-like structures up to 5mm in length, deep blue-black in color, with outer diameter of approximately 1 nm. Due to very bad delocalization of the electrons, C70 fullerenes are not ‘super aromatic’. This also a reason, it acts as an alkene, deficient in electrons and reacts with an electron efficient molecule rapidly.

C70 fullerenes find their applications in many domains. They are usually utilized as organic photovoltaics (OPVs) C70 fullerenes are powerful antioxidants, which reacts instantly and at a great rate with free radicals, which are mostly a reason for death or cell damages. They are also deployed as catalysts in various chemical reactions, in the purification of water, protection of biohazard materials, in the production of portable power and in the field of medical and vehicles.

The derivatives of the fullerenes that are soluble in the water are called Fullerenol. These molecules have the ability to remove free radicals. Fullerenols are commonly called as ‘Radical Sponges’, due to their characteristics of removing free radicals. They have great antioxidant properties due to the delocalized double pi-bond in the cages of fullerenes. They are mostly synthesized by the addition of the hydroxyl groups to C60 fullerene. Fullerenols possess a hollow-spherical shape as fullerenes.

Fullerenols find the widest application in the field of science and technology. The ability of fullerenols to soluble in water extends its uses in medical applications. They can be transformed into triplet state with the help of ultraviolet or visible light. The transformed material is very reactive and can rapidly react with oxygen or other biomolecules and found its applications and uses in photosensitization. They are excellent antioxidants as well. Their dual nature enables them as cytotoxic materials in the diagnosis of tumors cells and as an immunity agent in normal cells to protect them.

Due to their spherical structure, they can be used for carrying contrast agents, drugs and radiopharmaceuticals. They are also used to reduce oxidative stress during the transplantation of small intestine in dogs. They are used to protect the human lungs against oxidative damage. For their excellent pro-medical features, they are used in chemotherapy, radiobiology and in the diagnosis of neurodegenerative diseases. Due to their application in chemotherapy, they are excellent agents in the diagnosis and treatment of cancer and cancerous cells and tumors.

Other types of fullerenes

C60, C70, and Fullenerol are not the only possible forms of fullerenes. There are in fact many types of structures that can be constructed with hexagons and pentagons. The interesting thing is that each type of structure must always contain 12 pentagons, whatever the number of hexagons. Pentagons are necessary to have a closed structure. The number of vertices in any form of fullerene is necessarily even. The smallest fullerene is the C20, which contains 20 pentagons and no hexagons. However this type of structure has strong internal tensions because the shape of each carbon molecule is strongly non-planar. Other possible fullerenes are C28, C32, C44, C50, C58, C70, C76, C84, C240, C540, C960, and many others. Of the forms of fullerenes, the most common are C60 and C70, the others are very rare. 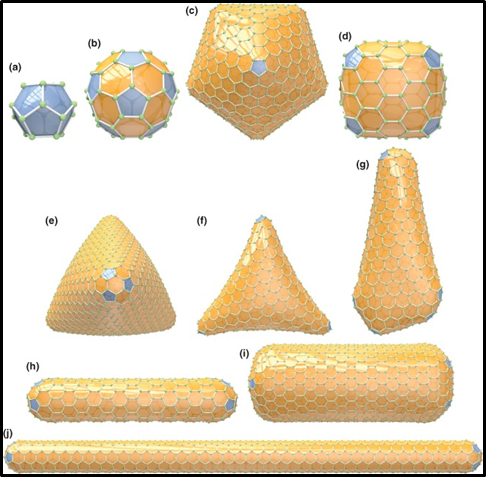 Thus, Fullerenes is a carbon compound having a variety of types of which, the three important types are C60, C70, and Fullenerols. The fullerene carbon-60 consists of 60 carbon atoms, which form a spherical surface of pentagons and hexagons. It looks like a football. These three forms of fullerenes have a wide range of applications, ranging from medical sector to electronics. It was discovered by scientists Harold Kroto. He was awarded with Noble Prize for Chemistry for discovering this revolutionary material. The researchers are working on discovering more of their applications and aim to benefit from its unique characteristics in the future. 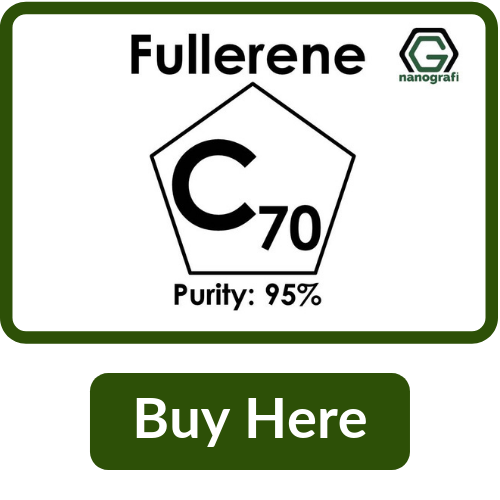 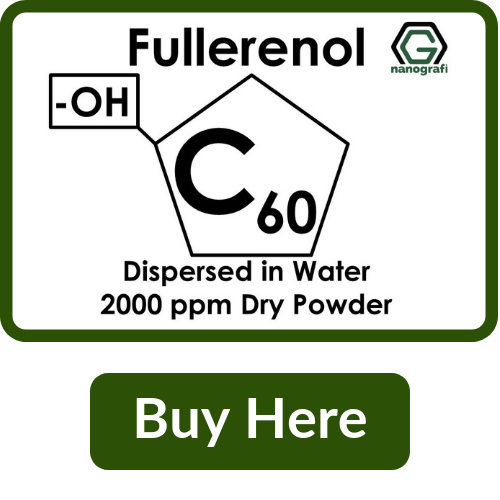