Over the past 10-15 years, nanotechnology has become an integral part of human everyday life. Nanoparticles are used in various industries, including the food industry, pharmacology, medicine, and cosmetology, and are part of widely used dietary supplements, hygiene, and packaging products.

Nanotechnology, with its atomic-scale capabilities that drive much of the dynamics of the natural and physical world, has the potential to make unprecedented advances in human history. In this article, we will discuss the applications of nanotechnology in our daily life and the importance of nanotechnology.

Nanotechnology, which appeared in the last quarter of the 20th century, is rapidly developing. Almost every month there is news about new projects that seemed like an absolute fantasy a year or two ago. Nanotechnology is an expected production technology focused on the cheap production of devices and substances with a predetermined atomic structure. This means that it operates on individual atoms to obtain structures with atomic precision. This is the fundamental difference between nanotechnology and modern "volumetric" bulk technologies that manipulate macro-objects.

Let us remind the reader that nano is a prefix denoting 10-9. Eight oxygen atoms can be located on a one-nanometer length.

Research carried out in the nanoscale range lies at the intersection of sciences, often research in the field of materials science affects the fields of biotechnology, solid-state physics, and electronics.

The world's leading nanomedicine scientist Robert Freitas said: "Future nanomachines must be made up of billions of atoms, so designing and building them will require a team of experts. Each nanorobot design will require the combined efforts of several research teams. The Boeing 777 was designed and built by many teams around the world. The nanomedical robot of the future, consisting of a million (or even more) working parts, will be as complex as an aircraft."

Why are nanoparticles so special and different?

In nanoparticles, the surface area to volume ratio is very high, while in macroscopic objects it is much lower. This feature leads to the emergence of new unique properties of nanoparticles - first of all, their high penetrating ability. Nanoparticles can enter cells through the pores of cell membranes, which are much larger than them. Another way is the various mechanisms of endocytosis. This is, firstly, phagocytosis, i.e. cell nutrition, and secondly, pinocytosis, i.e. capture of fluid by the cell. The receptor of the cell membrane can also bind to the ligand substance, and then the conformational transition of the molecule occurs according to the "key-lock" type. Ultimately, the substance ends up in the intracellular space. Such a mechanism was formed in the process of evolution, to provide the cells of the body with the substances necessary for their development. Thus, the nanoparticle can enter the cell in a specific way. It moves from organ to organ with blood flow, overcomes the body's natural barriers, and can penetrate tissue cells.

What can Nanotechnology do?

Nanotechnology can provide the utensils to engineer both inorganic and organic matter at the atomic level with the potential to realign society and change the structure of the business. It can also bring new business models, design tools, and manufacturing strategies to life at a low price and highly efficient.

If progress in nanotechnology can reach critical mass in delivering radically ground-breaking advancements such as automatic self-assembly, most industries will be influenced. Industrial and post-industrial supply chains will change.

What if drug development and manufacturing costs were lowered by 70%?

What if power generation no longer depended on fossil fuels?

What if the manufacturing lines to make computers cut costs by 50%?

What would be the impact if nanotechnology is applied in reducing the costs of essential goods and services that affect the quality of life, health, habitat, and transportation?

There would surely be a histrionic impact on lifestyle. Most value chains, support links, alliances, and distribution channels will be disrupted. Financial services, learning institutions and production will be reformed.

Imagine the emergence of a nanochip with the handling power of ten supercomputers for the price of a quartz watch and lesser than a keychain or a super-strong and cheap material for building and engineering capacity of eliminating the market for steel and metal. As the global economy continues to be transformed by new technologies, an intense race will develop for ability, intellectual property, capital, and technological knowledge.

As nanotechnology changes from the theoretical to the practical, the possible influence on society, business, and the economy will become more and more evident, promoting the necessary responses to current problems. We must have the ability to shape the strategic nanotechnology future of our nations.

Most of us regularly use some or other advances in nanotechnology without even knowing it. For example, modern microelectronics is no longer micro, but nano: transistors produced today - the basis of all chips - lie in the range of up to 90 nm. And further miniaturization of electronic components to 60, 45, and 30 nm is already planned.

Moreover, Hewlett-Packard announced that traditional transistors will be replaced by nanostructures. One such element is three conductors several nanometers wide: two of them are parallel, and the third is located at right angles to them. The conductors do not touch but pass like bridges one above the other. In this case, molecular chains formed from the material of nanowires under the influence of a voltage applied to them descend from the upper conductors to the lower ones. Circuits built using this technology have already demonstrated the ability to store data and perform logical operations, that is, to replace transistors.

With the new technology, the dimensions of microcircuit parts will drop significantly below the level of 10-15 nanometers, to a scale where traditional semiconductor transistors simply physically cannot work. Probably, already in the first half of the next decade, serial microcircuits (still traditional, silicon) will appear, in which several Nano elements created using the new technology will be built.

The Kodak Company in 2004 released Ultima inkjet paper. It has nine layers. The top layer consists of ceramic nanoparticles that make the paper thicker and shinier. The inner layers contain 10 nm pigment nanoparticles that improve the print quality. And the quick fixation of the paint is facilitated by the polymer nanoparticles included in the coating.

Now we are already seeing the onset of the nano revolution: these are new computer chips, new tissues that do not leave stains, and the use of nanoparticles in medical diagnostics. Even the cosmetics industry is interested in nanomaterials. They can create many new non-standard directions in cosmetics that were not there before.

In the nanoscale range, virtually any material exhibits unique properties. For example, silver ions are known to have antiseptic activity. A solution of silver nanoparticles has a much higher activity. If you treat a bandage with this solution and apply it to a purulent wound, the inflammation will go away and the wound will heal faster than using conventional antiseptics.

The domestic concern "Nanoindustry" has developed a technology for the production of silver nanoparticles, which are stable in solutions and the adsorbed state. The resulting drugs have a wide spectrum of antimicrobial action. Thus, it became possible to create a whole range of products with antimicrobial properties with a slight change in the technological process by manufacturers of existing products.

Similar products are produced in every sector. One firm produces coatings with silver nanoparticles for the treatment of chronic inflammation and open wounds. 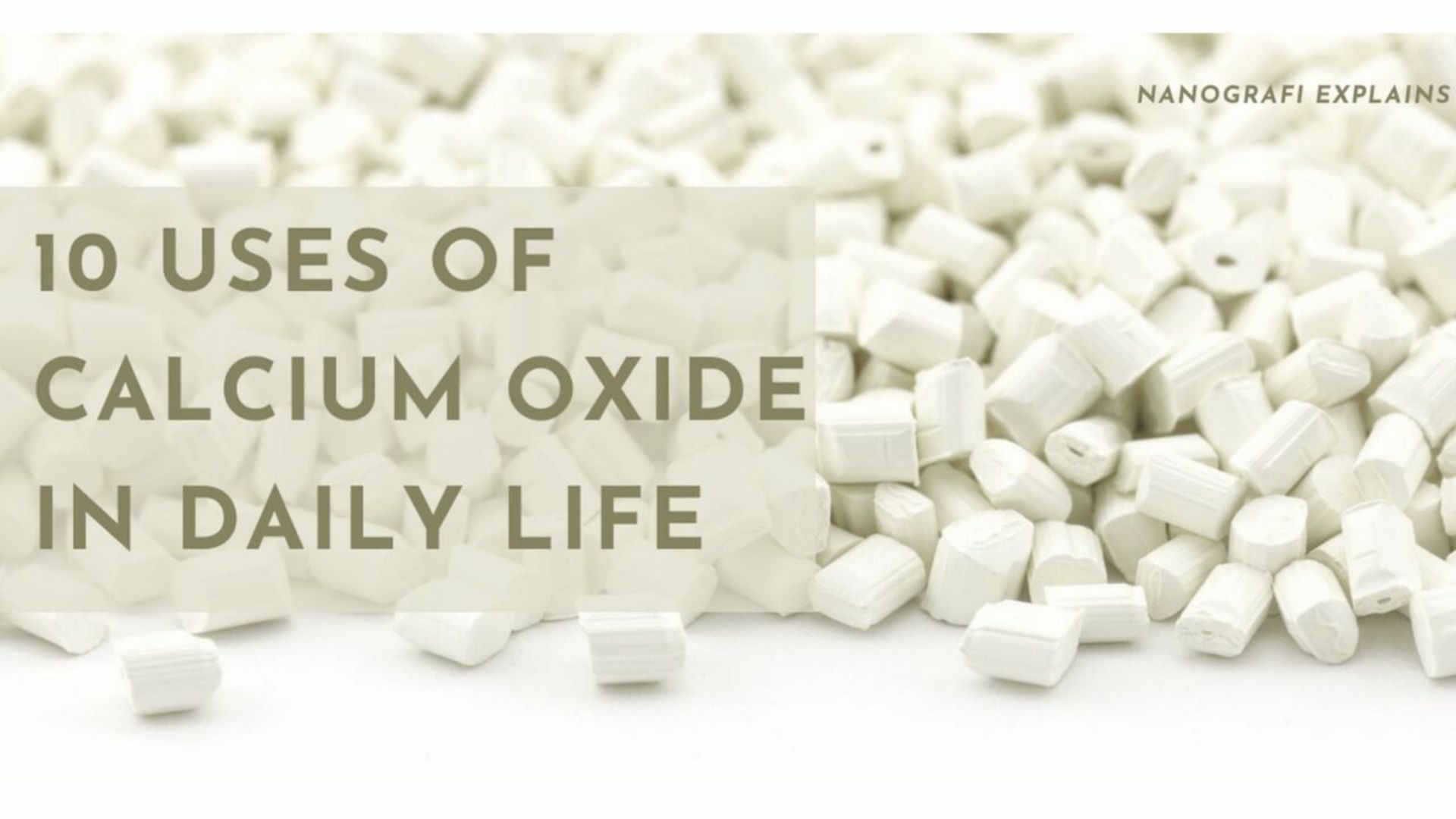 To get more information about Calcium Oxide in Daily Life,

Another type of nanomaterial is carbon nanotubes with colossal strength. These are peculiar cylindrical polymer molecules with a diameter of about half a nanometer and a length of up to several micrometers. They were first discovered less than 10 years ago as by-products of the C60 fullerene synthesis. Nevertheless, electronic devices of nanometer sizes are already being created based on carbon nanotubes. It is expected that in the foreseeable future they will replace many elements in the electronic circuits of various devices, including modern computers.

However, nanotubes are used not only in electronics. There are already tennis rackets on the market, reinforced with carbon nanotubes to limit twisting and provide more power to hit. They are also used in some parts of sports bicycles.

Thus, Rapid technological evolution has formed the basis for the exponential growth of innovation. Advances in new technologies have gone beyond our ability to accurately forecast their impact on society, business, and the economy. It is necessary to have the appropriate knowledge to visualize the new context in real-time. We are in the middle of a paradigm shift in which the sciences destined to the knowledge of nature are replaced by integrated sciences-technologies destined to transform nature to restore lost patterns, respond to socioeconomic needs, and make life on Earth possible...

Our civilization is witnessing the fastest and most comprehensive technological change in history. Nanotechnology has the characteristics necessary to redefine, reshape, and transform economies and societies on a global scale. Manipulation, for the first time, of matter at the atomic level will force a reevaluation of global markets, economies, and industries on a scale never before experienced by humanity. The omnipresent nature of nanotechnology as a fundamental science-technology has applications in numerous services and industries linked, among others, with health, materials, electronics, robots, photonics, and the preservation of the environment.