The term "lotus effect" refers to water repellency and self-cleaning, seen in graphic mode as a drop that is kept on a surface instead of being absorbed. The origin of this expression has to do with a flower, known as “lotus flower”, which is a scientific mystery because it has not been possible to discover why it does not get wet. The hydrophobic characteristic of the lotus flower has been imitated for useful effects of human life, being one of the main tasks of nanotechnology research.

The lotus effect has been reproduced on various surfaces, such as wood, plastic, glass, metal and stones including absorbents, textiles, etc., through chemical products of technological innovation. The impact of these achievements has been totally beneficial in business, domestic and personal sectors, since it generously contributes to extend the life of different materials, improve their appearance, and avoid constant investment in maintenance and cleaning. For example, a car can be perfectly protected in body and windshield, extending durability and avoiding fogging on rainy days; liquid repellency in textiles is very useful because it prevents stains and lightens awkward incidents such as wine spillage; wooden doors and furniture, among many other things.

Lotus effect has a great impact, due to its multiple benefits, that now the commercialization of the products has spread globally, making nanotechnology one of the most powerful markets. In this preponderant rise of nanotechnology, Nanografi offers a wide range of products related to Nanotechnology.

Let’s have a deeper look at Lotus Effect in Nanotechnology:

Understanding of the Lotus Effect

Superhydrophobic surfaces, which have existed for hundreds of millions of years, are now back in fashion thanks to Nanotechnology and the Lotus Effect. It has long been known that Lotus leaves, an aquatic plant of Asian origin, do not get wet. As a result, the rainwater takes the form of spherical drops when it comes into contact with the surface of its leaves, which allows it to slide freely taking all dirt with it and keeping the leaf clean and dry, as well as free of bacterial colonies, despite living in polluted waters. This “self-cleaning” effect, called the Lotus effect, is also found in other plant species, birds and insects. 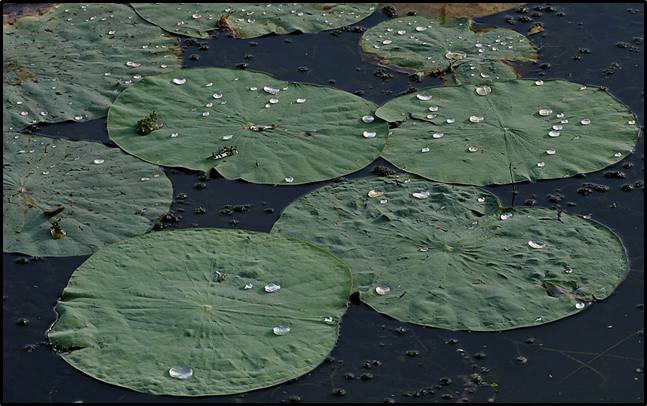 To explain the superhydrophobic behavior of the Lotus leaves, biologists had to study the chemical composition and topography of them. Basically, they found that the leaves had two levels of structures that explained this behavior: a microstructure level (of the size of microns or thousands of a millimeter) consisting of surface lumps and a nanostructure level (of the order of the millionth of a millimeter) formed by small hairs. Both systems are constituted by a waxy coating, which together makes the surface of a lotus leaf repel water and does not get wet (superhydrophobic surfaces).

This particular phenomenon, studied by Dettre and Johnson in 1964, inspired by the lotus flower (scientific name of the Asian lotus: Nymphaea nelumbo), represents the plant's ability to be super-hydrophobic, that is water repellent, and consequently self-cleaning, thanks to the particular geometry of the leaf surface and to a covering by a thin layer of wax, which allows the rain to wash away the dirt that accumulates on it.

To date, more than 200 plants (for example cauliflower) are known with characteristics similar to those of the lotus, however the undisputed fame of the flower has led scholars to name this effect by its name. Among the plants in which the same effects of super-hydrophobicity and self-cleaning can be found, we find nasturtium, prickly pear and Alchemilla. This effect can also be found on the wings of some insects.

The importance of the Lotus effect to create self-cleaning materials is clear, so much so that biologists Neinhuis and Barthlott patented the idea under the name "Lotus-Effect". Since then, the Lotus Effect has been studied by many botanists and physicists to better understand the phenomenon and find possible technological applications. Unlike hydrophobicity (water repulsion), which is a chemical property, super hydrophobicity is a fundamentally physical property. The difference between both properties depends strongly on the contact angle between the surface and the water, so that if the contact angle ranges between 90 and 150 degrees, we get hydrophobic properties. On the other hand, with an angle of contact greater than 150 degrees, this effect is amplified and becomes an impossible to wet surface, thus obtaining superhydrophobic characteristics.

The Lotus, an ancestral symbol of spirituality, is now a source of inspiration for innovative technological applications, potentially applicable in innumerable sectors, including the building sector, with the creation of roofs and paints capable of self-cleaning.

Some interesting applications of the Lotus effect could be the development of paints that prevent corrosion of metallic materials. Such paints have excellent physical and structural properties and the incomparable Lotus-Effect technology. This technology has the ability to clean itself: the dirt slips away with the rain and the facade remains clean and dry for a long time.

In addition to being used as perfect insulators to prevent damage to electrical or electronic equipment by accidental contact with water. The effect is useful in paints for protecting the walls and protection of public spaces against vandalism, as well as the development of antibacterial surfaces.

Another example of the biotechnology applied to this effect is the Rain Stop: a nanotechnological hydrophobic solution for glass and windshields. Once applied, the product guarantees optimal visibility in all weather conditions, contributing to road safety.

An evocative idea, born from the mind of the Architect and Artist Luc Schuiten, observing the Lotus, was to think of a model of utopian city, with which to build, as defined by him, the vegetable cities, inspired not only by lotus leaf, which could replace our roofs due to its particular shape that already in nature is able to channel the water creating a system of pipes and rainwater collection tanks inside the ideal building; but also to the same flower, from which it proposes to copy the opening and closing system of the petals, which could allow to store and manage the methane gas produced by organic waste from the city and to transform each petal into a huge solar panel.

For this reason, the architect collaborated with ArteSella where over time, more than 300 artists have come and gone in this path, delivering their work to the care of the ArteSella Association. 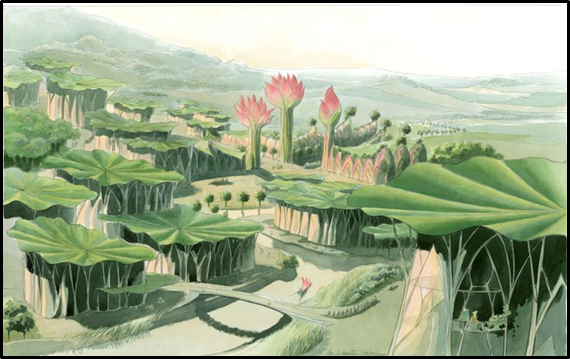 An illustration of the Vegetal City vision of Luc Shuiten.

Other applications could be aimed at preventing water condensation and ice formation in extreme climates on the surface of cars, ships and airplanes.

These are some of the examples of the possible direct applications of the Lotus Effect, but its application on fabrics could revolutionize the textile industry by manufacturing clothes for rain, less polluting clothes for the health sector, garments impossible to stain and, therefore, no need to wash them. This could mark the end of the washing machine. Without a doubt, nature and its four billion years of experience continue to inspire technology.

Let's take a short trip together that will introduce us to the world of Nanotechnology. Today the term 'Technology' indicates the search for solutions to practical problems through the creation of tools or procedures to improve or simplify an aspect of everyday life.

In physics, what we mean Nanotechnology is the theory that hypothesizes the possibility of controlling the structure of matter by acting on the nature of the connections between atoms. So, we can talk about Nanotechnology when looking for solutions through the study of the Matter Structure entering the infinitesimal dimension field. We use the nanometer scale for the measurement of molecules and atoms. -1 nanometer corresponds to a billionth of a meter.

The fields of application of Nanotechnology are many and range from the field of robotics to medicine, from electronics to construction, from textiles to optics. It is from the observation of nature and its marvelous "microscopic" creations that the idea of creating mirrors based on the periodic modulation of the refractive index for the application of optical telecommunications through the study of all pigments is born, or the idea of creating self-cleaning materials that copy the microscopic morphology of the surface of the Lotus Plant, or the idea of replicating the morphology of the Gecko leg tissue for the creation of materials that allow perfect adherence to surfaces.

Nanotechnological Products are able to bring Nanotechnology into our homes. For example, Nanotechnology Silicon-Based Products use silicon nano particles that create molecular-level bonds in silicon-based substrates (e.g. glass, ceramics, stone) which modify the surface structure of the substrates to form a uniform and breathable “active” barrier makes it Hydro-Oil Repellent.

Since each product has its own molecular structure, there are specific Nanotechnology products for each surface that bind to the structure of the support at the molecular level, creating an invisible Barrier effect that protects it from the action of water, oil, atmospheric agents, preserves it from the wear and ease of cleaning.

Lotus Effect proposes Nanotechnology products with molecular activity and solutions with high technological value in the field of protection, cleaning and maintenance of internal and external supports such as glass, stainless steel, ceramic, wood, fabric and also bricks, tiles, stone, cement as well as degreasers and lubricants for bicycles, motorcycles and cars and also professional technical cloths.

A video of testing Nanografi's Hydrophobic suspension for plastic. Different suspensions are available for wood and glass as well.

Thus, the lotus effect is a particular capacity for self-cleaning, due to the high repellency of the materials for water, as is the case with the leaves of the flower plant. The study that was done on the lotus leaf inspired researchers and led to the design and production of useful substances in different technological applications, from the transport sector to the biomedical one. Naturally we try to reproduce the lotus effect in paints, tiles, fabrics, floors and other surfaces. In conclusion, we will have to look more closely at what we have around us and let ourselves be inspired, not by chance that Albert Einstein understood it a long time ago.