Graphene is a material obtained by exfoliation of graphite. It consists of carbon atoms arranged in a hexagonal pattern and forms sheets as thin as atoms. Graphene has, among other characteristics, to be an extremely effective water filter.

Graphene is a two-dimensional crystal, a layer of carbon atoms, in the form of a hexagonal lattice. Graphene has good thermal conductivity, mechanical rigidity; it is chemically stable, durable, and elastic. After developing carbon nanotubes, gas sensors, transistors, solar panels, and liquid crystal displays, water filters have also been invented based on graphene.

One of the team of researchers who succeeded in developing an industrial technique was of Mainak Majumder that made it possible to produce from graphene a film through which water can be filtered.

The graphene oxide obtained by the scientists is in the form of a malleable paste that can be spread with a simple butter knife.

Graphene water filters are stronger than current filters, made of carbon; they are resistant, stable, and resist wear much better. The breaking strength measured by scientists sets a record. If a stretch film for food packaging plastic had the same resistance, it would support a mass of two tonnes on a pencil point.

The Importance of Water

Freshwater is a natural and valuable component of life. On Earth, every day the number of people increases, this inevitably makes the demand grow not only in food but also in freshwater. The data suggests the number of people from 2015 to 2019 increased by 379 million, from 7.289 to 7.668 billion people, which is about 95 million population growth per year. There is also information showing an increase in water consumption by 64 million m3 per year.

The lack of desalinated water is already felt in Europe and Asia, which creates economic and technological problems.

This disadvantage is caused in many aspects by the increase in water consumption by production processes. For example, only one metal plant uses water as much as one city with a million population.

A large volume of freshwater becomes unusable due to the discharge of semi-treated or untreated water into rivers and lakes - each cubic meter of wastewater pollutes 40-60 cubic meters of clean water.

During heavy rains and during snowmelt in agricultural areas, intensive washing of mineral fertilizers and pesticides from fields to rivers and lakes occurs, which leads to infection of water bodies with harmful chemicals.

There comes anthropogenic eutrophication of such reservoirs - an increase in productivity. Eutrophication entails the enhanced development of some aquatic organisms, in particular phytoplankton. The deep zone with anaerobic metabolism, the accumulation of hydrogen sulfide, ammonia expands, oxidation-reduction processes are disrupted, and oxygen deficiency occurs. This leads to the death of fish.

It is possible to categorically prohibit the discharge of untreated wastewater, but a conventional ban will not solve the problem. The drains of industrial production discharged into water bodies, and sewers have their own standards and characteristics, which are constantly becoming more complicated. And the total price of water treatment at modern enterprises, on average, is from 15 to 40 percent of their total cost.

Chemical and oil refinery wastes are dangerous, and their treatment does not completely eliminate the harmfulness of such "purified water" - about 10–20 percent of pollutants remain, including salts dissolved in water. The amount of freshwater is limited. According to research, by 2025, states will experience an acute shortage of freshwater, and by 2030, water shortages will be observed for approximately 47 percent of the population. Already, an acute shortage of water in the desert and semi-desert regions causes a rapid migration of the population.

We know that the treatment of contaminated water occurs by the following methods: physical, chemical, and biological. In them, the process of settling and separation of the mass of petroleum products from surface wastewater takes place. Good results are obtained by a more complex method of electrocoagulation. Chemical cleaning is common, but it does not respond to detergents that enter the sewers. In this regard, Graphene oxide membranes are of great use and they filter the water with great efficiency. 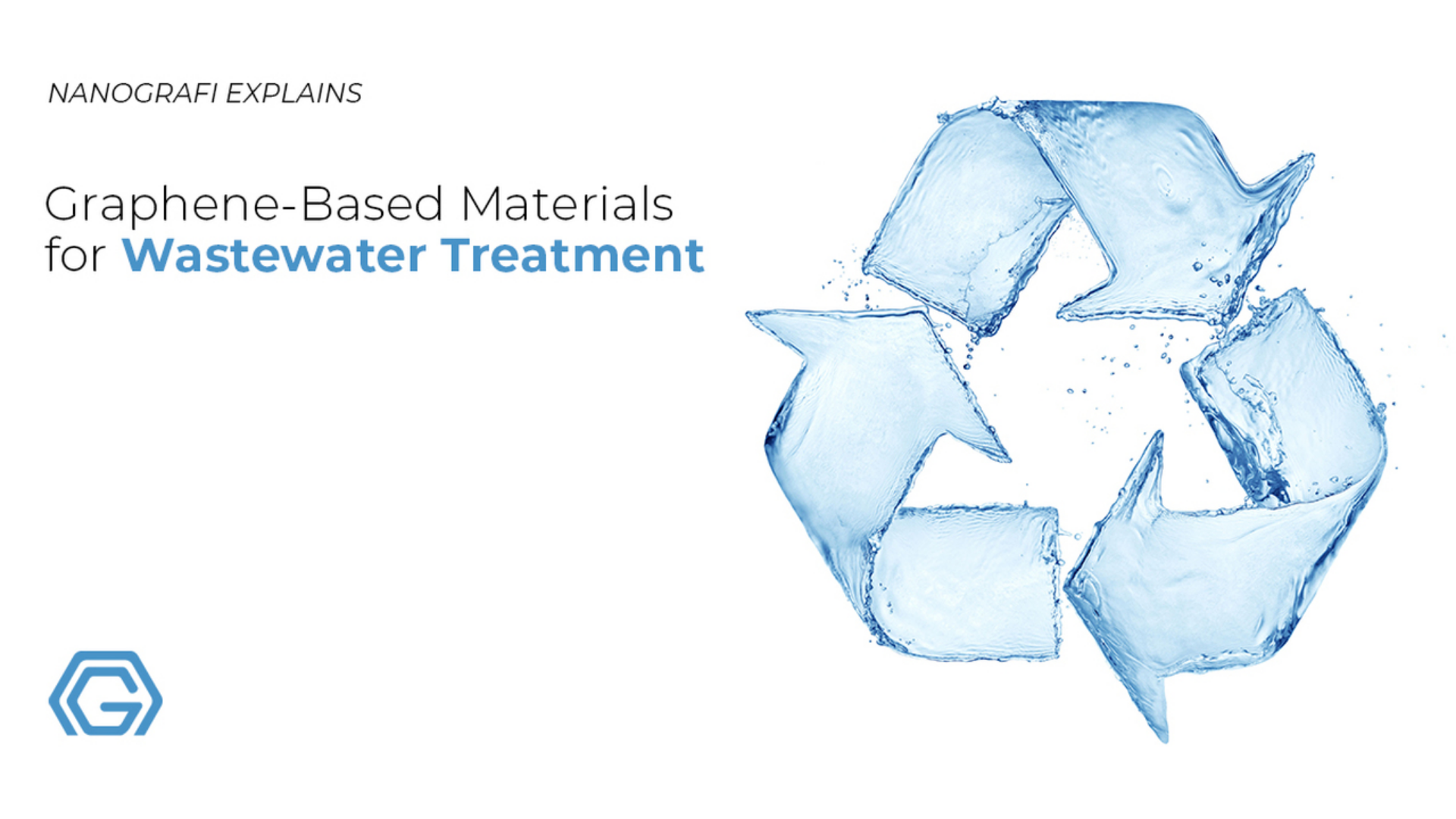 To get more information about the role of graphene in wastewater treatment,

Scientists suggest the use of graphene to purify water, as it is able to retain its characteristics for a long time. To create a thin sheet of graphene, high-precision technology is needed. Conveniently, the holes in the material can be repaired. There are types of graphene membranes that can filter saltwater, while a similar membrane will be much thinner than existing ones. Purified water, using a graphene membrane, is potable without further purification. CSIRO specialists obtained graphene from soybean oil, which makes the filter cheaper. Graphene is able to remove 99 percent of harmful substances for a long time. The reagent purification method can remove 97–98 percent whereas Physico-chemical methods can remove up to 95 percent harmful substances. Mechanical cleaning methods purify household liquids from suspended particles by 60–65 percent. Thus, the future lies with graphene membranes, which can soon be used in many areas of production.

The study "Graphene oxide – polysulfone filters for tap water purification, obtained by fast microwave oven treatment," published on Nanoscale as part of the European project Graphene Flagship, illustrates a new composite developed by researchers of the Institutes for organic synthesis and photoreactivity.

By combining graphene oxide sheets (GO) with polysulfone membranes and derivatives, scientists have created filters capable of capturing organic contaminants, molecules constituting active ingredients of drugs, cosmetics or detergents which are often not eliminated by conventional treatments and which can, therefore, contaminate the water in the water network.

The filtering capacity of the new Graphene Oxide membranes has been tested on samples of water contaminated with substances such as rhodamine, a dye widely used in the textile and pharmaceutical fields, the antibiotic ofloxacin, and the anti-inflammatory diclofenac, active ingredients present in dozens of eye drops, tablets, ointments. These molecules are part of the so-called emerging pollutants - drugs, pesticides, detergents, and various fragrances - recently identified in drinking water and subject to attention for possible health risks and the environment, so as to require the revision of the European directive on drinking water currently being examined by the EU. The measurements confirmed that the filtering performances of the polysulfone membranes added with graphene oxide exceed by more than three times those of the standard material containing the only polysulfone. The excellent performance is due to the unique properties of two-dimensional materials, in particular to the structure of graphene oxide: the layered arrangement of these sheets, separated from each other by nanometric distances that we can control, is ideal for trapping contaminating molecules and more efficient than that of classic three-dimensional filters.

The technique developed by Italian researchers is a novelty already protected by an international patent application, and the whole process takes place in water, without the use of chemical solvents and uses microwaves to permanently immobilize the graphene sheets on the polymer. Since any material for water purification must not release further contaminants into the filtered water, it is, in fact, essential that the additives used to enhance the membranes are immobilized in a stable manner. The tests carried out by inserting the Graphene oxide – polysulfone composite in commercial filter cartridges confirmed the great stability of the new material.

The benefits of the new material don't end there. The researchers conclude: Graphene oxide polysulfone membranes can be recovered after use, washed with a specific solvent to remove the contaminants they have collected and used again. In addition, the technique for adding graphene oxide can also be applied to industrial production waste of polysulfone membranes, reusing process residues otherwise to be disposed of and reducing costs. 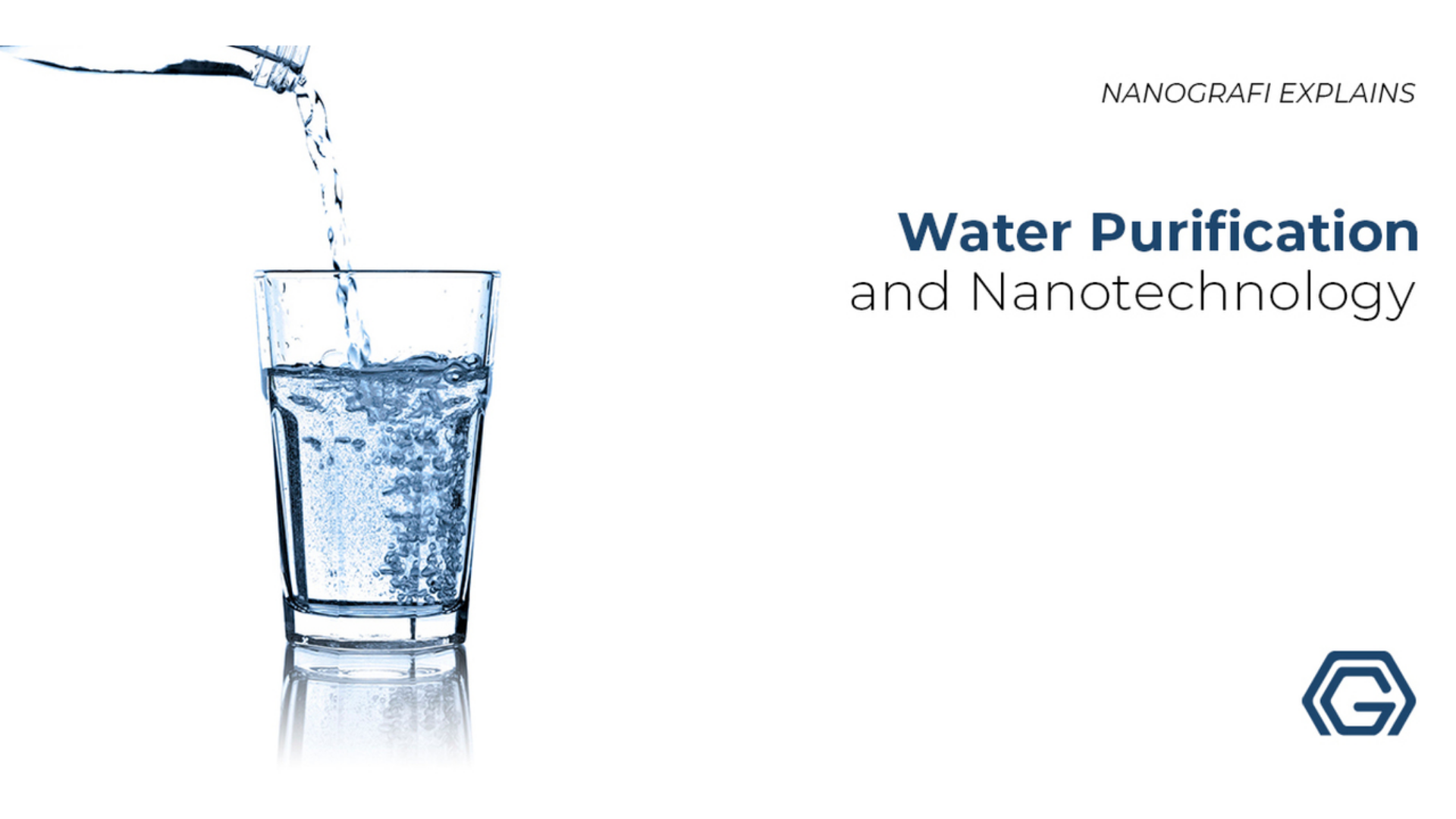 To get more information about the role of nanotechnology in water purification,

A team of investigators from the US Army Corps of Engineers has recently invented a water filtration membrane made of chitosan and graphene oxide. The technology is now available for integration into commercially available products and services through a patent license agreement.

Today's water filtration devices deteriorate rapidly and wear out quickly in aggressive and corrosive chemical environments and during the desalination process. The cost of repeatedly replacing filter devices is a major economic barrier to bringing drinking water to an estimated 63 million people who currently do not have access to it.

Various attempts have been made to produce more durable and long lasting water filtration devices with different levels of success. Thin filter membranes are needed that do not interrupt the flow of water. For this problem, graphene is believed to be the strongest, thinnest, and lightest membrane material available.

However, graphene oxide filters, while very durable, become deformable and unstable when immersed in water. This deformation allows the smallest pollutant molecules and salts to flow through the filter pores, rendering them ineffective.

But Army scientists developed a way to impart strength and stability to graphene oxide filters, making them invulnerable to deformation and swelling, even as the size of the filter membrane increases.

The new filter material is made from five parts chitosan to one part graphene oxide suspended in water.

Chitosan is a linear polysaccharide derived from the shells of crustaceans. It is commonly found in commercial markets, including agriculture, healthcare, and coatings.

The method of making the chitosan-graphene oxide filter includes protonating a quantity of chitosan; evaporating a solution on a surface to create a membrane that has a desired thickness, and place the membrane between two layers. This is done under a slight vacuum.

Since the material is antimicrobial and less susceptible to fouling, it can also be used to build surfaces or coatings and is applicable to disinfection products, medical devices, and advanced anti-fouling water treatment technologies. The overall costs of using the chitosan and graphene filters will be reduced by recycling the graphene oxide.

Thus, Graphene has revolutionized each sector of Science and Technology. Graphene has a large number of applications; graphene is likely to improve battery performance, to be used as a supercapacitor for energy storage, or to form a useful "supersable" to fight oil leaks and oil spills. This article discussed how Graphene oxide membranes can be used for water filtration and how they are more effective as compared to other water filtration methods. Graphene membranes filter only certain pollutants of specific interest and it has high efficiency.