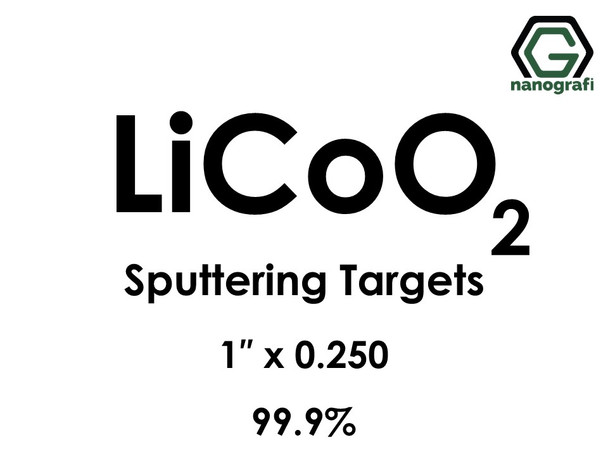 Now let's see how lithium cobalt oxide sputtering targets can be used in batteries. Batteries with very small sizes are of immense interest, as the sizes
of portable microelectronic devices and sensors decrease continuously. Thin film batteries can be used as power sources for various low power electronic
devices such as portable electronic devices and micro electro mechanical systems (MEMS) which require very low power and current levels and hence can
be powered by thin film batteries.

In battery applications magnetron sputter system can used used. The required thin film lithium can be generally deposited by conventional sputtering target
techniques, whereby a LiCoO2 sputtering target assembly, defined as the LiCoO2sputtering target bonded to a backing plate, can be used to deposit the
required thin film lithium. With regards to sputtering targets to produce Li thin films, a D.C. (direct current) magnetron sputter system can be employed. The
LixCoyO2sputtering target is generally represented by the formula LiCoO2 and forms a part of a cathode assembly that, together with an anode, is placed in an
evacuated chamber filled with an inert gas, preferably argon. Magnets are disposed above the LiCoO2 sputtering target, and a switch for connecting target
backing plate to a D.C. voltage source. A substrate support is positioned below LiCoO2 sputter target within the chamber. In operation, a high voltage electrical
field is applied across the cathode and the anode. The inert gas is ionized by collision with electrons ejected from the cathode. Positively charged gas ions are
attracted to the cathode and, upon impingement with the target surface, these ions dislodge the target material. The dislodged target material traverses the
evacuated enclosure and deposits as a LiCoO2 thin film on the desired substrate, which is normally located close to the anode.