Nickel is a transition metal with atomic weight 28gm/mole. The ability of nickel to have good storage capacity and a higher energy density in batteries, at a relatively cheaper price, is one of its main benefits. Nickel has been used in second-generation lithium-ion batteries and has a total of two types, including NMC (LiNiMnCo or Lithium Nickel Manganese Cobalt Oxide) and NCA (LiNiCoAlO2 or Lithium Nickel Cobalt Aluminum Oxide). The first-ever nickel battery was the NiCd (Nickel Cadmium) battery which was the first battery using an alkaline electrolyte. Following this battery, many others were also invented i.e. NiMH (Nickel Metal Hydride) in the 1980s, NiFe (Nickel Iron), NiZn (Nickel Zinc), NiH (Nickel Hydrogen).

Nickel Cadmium batteries are commonly used for portable devices in the form of AA and AAA cells while NCA and NMC lithium-ion batteries are used in electric vehicles that use 80% and 33% nickel respectively. Nickel Iron batteries are used in many railway vehicles i.e. a locomotive in London as well as a subway in New York City [1]. Nickel Zinc batteries are preferable when high power and high voltage is required. Nickel Hydrogen batteries have performed well over a range of temperatures which makes them suitable for use in satellites.

Nickel has become most widely used in batteries due to its resistance to high voltages and conduction properties which means that the battery does not heat up upon heavy current flow. It is inexpensive and easily available and it can be easily weld. It is very popular among different battery parts; multiple nickel alloys are used in battery construction. This is because rechargeable batteries with long-lasting energy can be built with nickel current collectors. With the help of nickel for machinery ranging from airplanes to your Bluetooth devices. It is used in many forms such as strips, porous Ni foam, battery tabs and many more. 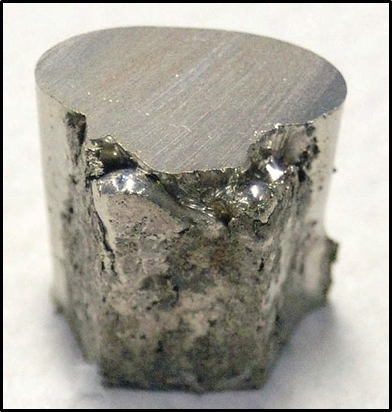 1. Abundance of Nickel: Nickel, second to Iron, is one of the most plentiful metals in the Earth’s core i.e. 80ppm.

2. Color of Nickel: It is a silvery-white solid metal that is found in arsenic and sulfide ores.

3. Melting/Freezing Point and Density of Nickel: It has a melting and boiling point of 1455°C and 2730° C respectively and a density of 8.908 g/cm3 at room temperature.

4. Physical Properties of Nickel: It is highly malleable and ductile and can be beaten into many shapes without cracking or fracturing. It can be shaped into wires, rods, sheets, tubes, and multiple more. Compared to iron, it is relatively harder.

5. Conductivity and Magnetic Properties of Nickel: Nickel is a fairly good electric and heat conductor. It is ferromagnetic and is one of the only 4 metals that, at room temperature, show magnetic behavior.

6. Reactivity of Nickel: It is highly stable in a solid-state and does not react with air but when finely ground and dispersed it ignites in air. Having such properties, it doesn’t rust or corrode.

7. Isotopes of Nickel: Nickel has many isotopes, the stable ones are; 58Ni, 60 Ni, 61Ni, 62Ni and 64Ni with 58Ni. Nickel alloys are solid solutions of nickel with other metals of which stainless steel is most popularly used. Other major types of alloys, of Nickel, are Nickel-Chromium alloys, Iron-Nickel-Chromium alloys, and Copper-Nickel alloys. Nickel alloys are made for their diverse properties like electrical resistance alloys, shape memory alloys, low-expansion alloys, soft magnetic alloys.

Why and how it is used in battery applications?

Nickel is a relatively cheap metal and has higher specific energy thus it can deliver large storage capacity and high energy density at very low prices. Nickel is used as a cathode of multiple rechargeable batteries including lithium-ion batteries. Despite having poor stability, Nickel is known quite well for having high specific energy.

These batteries make use of electrodes made using nickel oxide hydroxide, an alkaline electrolyte of potassium hydroxide, and metallic cadmium. These are rechargeable secondary batteries which are used for portable devices like camcorders, drills, computers and other small devices. This battery shows a memory effect though, i.e it can be rejuvenated and requires full discharges, periodically. It provides a voltage of 1.20V. This battery is banned in some countries due to Cadmiums’ toxic properties which make it hard to recycle.

These batteries have low internal resistance i.e. high self-discharge but can have a storage capacity of up to 2-3 times of same-sized NiCd, and an energy density approaching the one of a lithium-ion battery. Both Nickel Cadmium and Nickel Metal Hydride batteries use Nickel oxide hydroxide (NiOOH) as the cathode in their batteries and provide a voltage of 1.20V. This battery is even harder to charge as compared to Nickel Cadmium considering that it self-discharges up to 20% in the first 24 hours after charging and about 10% every month after that. Thus NiMH’s rank is one of the highest in the class [2]. Panasonic and Sanyo developed the Eneloop NiMH which was capable of storing charge for six times longer which meant a battery life of six-times the original NiMH battery, this innovation made the NiMH battery even more reliable.

The nickel-iron battery is a rechargeable battery. It has an iron anode and a nickel oxide hydroxide cathode within a potassium hydroxide electrolyte. It produces a discharge of 1.20V. It performs well at high temperatures but fails at low temperatures. Per month, the battery has a high discharge of 20-40% and has a specific energy of about 50Wh/kg. This deemed Nickel Iron batteries unreliable. Although due to its long life its use is being considered again as its longer life requires less man-power required in recycling it. The properties of resistance to vibration and the ability to work in high-temperatures gave NiFe the chance to be used as the preferred battery in Europe, for mining. It was also used for the battery-powered V-2 rockets and the German V-1 flying bombs and during World War II.

This also uses Nickel oxide hydroxide as the cathode. It can be cycled about 200-300 times and has a specific energy of 100Wh/kg, which is relatively high. This battery is optimum for high power and high voltage uses. It is also available in AA sizes. Due to dendrite growth, the battery went through short cycle life and high self-discharge causing an electrical short in rail cars back in the 1930s and 1940s.

Encapsulated in a pressurized vessel, the cell includes solid hydrogen electrodes, nickel electrodes, electrolytes, and gas screens. It provides a voltage of 1.65V and has a long time before expiring. It has a good calendar life due to minimal self-discharge, low corrosion, and an amazing temperature range of –28°C to 54°C [2]. Due to such properties, this battery is ideal for LEO satellites.

A combination of nickel, manganese and/or aluminum are used in lithium-ion batteries to improve longevity, loading capabilities, and cost. In NMC, the cathode is a 1-1-1 ratio combination of cobalt, manganese, and nickel. NMC is the best choice for power tools, electric power trains, and e-bikes. [2]

Use of Nickel in battery Equipment

Nickel has many useful features which makes them one of the great and most frequently used materials for battery tabs. Nickel tabs are made from nickel alloy 201 which is ferromagnetic and has highly conducting properties and does not corrode easily. Lithium alloy is made with nickel due to its property to endure the highest voltage among metals such as Al and Cu which corrode at voltages lower than 4V while Ni can withstand up to 4.5V. It is easy to weld in comparison to other materials used in batteries. Due to its low resistance, it is very safe to use this material it does not heat up and waste energy or damage the battery.

Batteries are constructed keeping in mind that the internal resistance is low and the conductivity is high. Since porous materials are the most suitable to be used as current conductors for lithium-ion batteries nickel foam is used. It has low density since 75-95% space is void therefore it makes it the perfect material [3]. It is used in rechargeable batteries and is used as a current collector due to its properties such as high conductivity and three-dimensional structure. 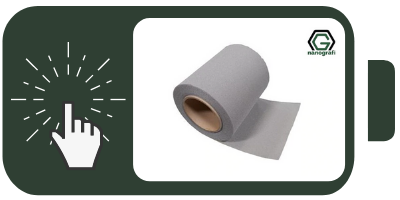 Aluminum is used in lithium-ion batteries for battery tabs but since it does not have good welding properties nickel is used. Aluminum is plated with nickel, aluminum plating has many technical difficulties it has proven to be better than copper and tin. Aluminum and nickel have no plastic deformation so there isn’t a strong bond between the two materials that cause a large resistance in the cell. The layered composite tab is made from Nickel is 0.5 to 40% of the thickness of the positive electrode tab [4]. Click to buy Aluminum Nickel Composite Strip for Battery Tab.

Pure Nickel strips are used in battery tabs since they can be easily weld and smoldered. Holes can be made into them to create extra bus bars by drilling into multiple strips at once or punching a hole at a time. The width of these strips determines their capacity to let varying currents pass through without corrosion. If the nickel strip is too thin it may easily corrode so to be on the safe side either nickel is use by layering it or soldering it or even using a copper wire. Nickel strips are widely used in electrical appliances, chemical machinery, rechargeable batteries, computers, cellular phones, power tools, and such other tools. Click to buy Nickel Strip for Battery Tab.

Other applications of nickel in battery equipment

Nickel is used in batteries, machinery, devices and numerous other appliances. Nickel has been used in Nickel Cadmium and Nickel Metal Hydrid secondary batteries over the past few decades. These batteries have proved to be long-lasting and rechargeable. From the smallest devices such as phones and cameras to cars and planes all use Ni batteries due to its low cost and high delivery. Besides batteries, there are many other valuable uses of nickel in various sectors.