Graphene based aerogels or Aero-Graphene are the only 3D materials which are light weight than air. Aero-Graphene is the least dense solid ever made. Due to the remarkable properties, like, electrical conductivity, high mechanical power and also, thermal resistance, a lot of interest is gained towards them, currently. This review, covers the information on Graphene Aerogel, the application fields for instance in storing energy, protecting environment, electrochemical sensors and, supercapacitors, some of the properties of Graphene Aerogels such as high ability of absorption for dyes, inorganic ions, organic solvents and Oils are also discussed. This article focuses on the introduction of both Aerogel and Graphene separately and how they fit together with their properties and uses.

Let’s talk about Aerogel first. Mixing the solvent with polymer to make the gel, then eliminating liquid out of gel and substituting it with usually air (gas) makes Aerogel. The content has high air (99.98% air from volume) marks the Aerogel one of an Earth’s lightest and low dense solid material. Aerogels can be formed by different chemical mixtures, and they all are materials from a varied class with exceptional properties. They are also well-known as brilliant insulators, and normally have less density and less thermal conductivity. Aerogels can also be used in various applications, and although they are around since the 1930s, their development is still continuing (for example, NASA's Glenn Research Center in Cleveland has developed many ground-breaking ways of making new types of aerogels).

Let’s come to Graphene now, since being discovered in 2004, it is still the concentration of researchers due to its remarkable mechanical, thermal and, electrical assets. In general, characteristics for instance, its increased strength/strain-to-failure, chemical stability and, elevated surface area have seen usage in energy storage, sensors, Nano-electronics, catalysis, biomedicine. It’s significant to make and characterize graphene materials with 3-D structures like hydrogels, macro-porous films, and, aerogels. In comparison of these three structures, Aerogels show the good deal and they have been thoroughly investigated. It’s said that the Aerogels show more electrical conductivity in comparison to the rest which are made from dispersion of graphene sheets. Graphene Aerogels is a substitute for expensive and rare Helium, now as graphene is lighter than air.

Graphene Aerogel is also known as Aero-graphene, is measured as a least dense Solid in presence right now (they can be composed on small plants because of their light weight!). They are quite flexible and can simply return to their real form after little compression. Also, density makes Aero-graphene very absorbent (they are able to absorb over 850 times its weight). It means that Aero-Graphene can be beneficial for environmental cleanings like oil spills, and after absorbing the fallen material; the Aerogels only has to be picked up. Aero-Graphene may have some usage in the storing of energy and its transfer by allowing the creation of lighter, high-density-energy batteries and strong research is going on this matter. 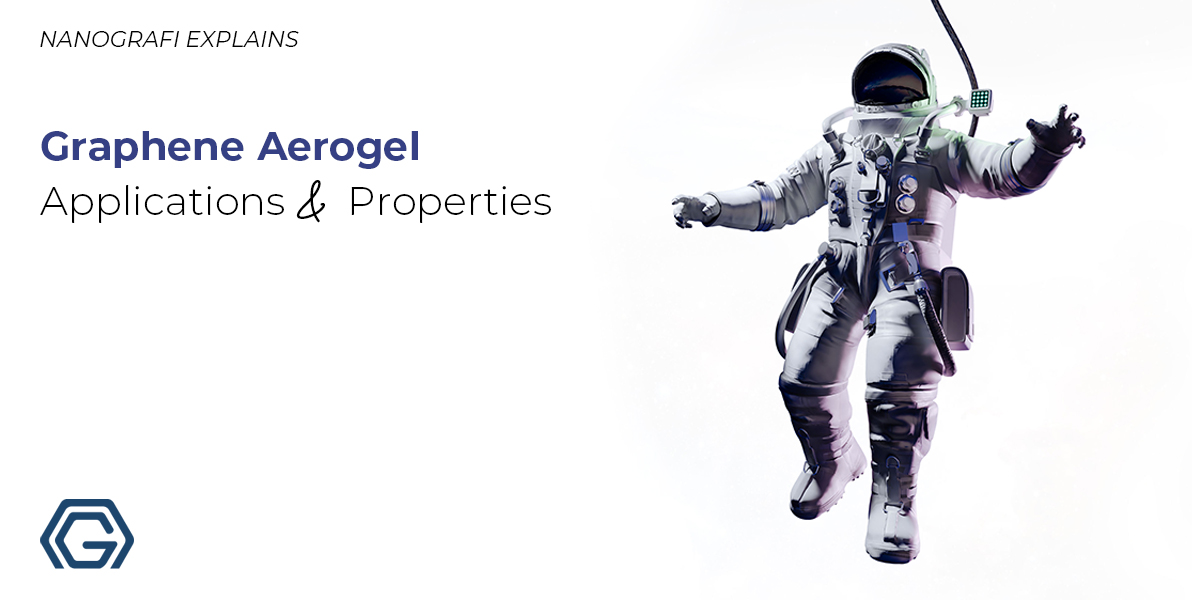 Aero-graphene up-till now is the least dense solid known, at 160 g/m3 (0.0100 lb/cu ft; 0.16 mg/cm3; 4.3 oz/cu). It doesn’t float in the air. It was developed at Zhejiang University. The material allegedly can be formed on a cubic meter scale. It can be produced by Cross-Linking Methods, Chemical Reduction, Hydrothermal Reduction, and Template-Directed Reduction. Graphene Aerogel is as Graphene Foams. Graphene foams are generally made by CVD progression on a metal structure (which can be detached later) and are a little more conductive than Graphene Aerogels. Graphene Aerogels are being wholesaled commercially for about $300 per gram now.

Aero-graphene is 99.8% Air, Strong like Steel, and the World's Lightest Material. A Graphene Aerogel is 12% lighter than the last lightest material recorded and seven times lighter than air. It is so light and dense that it can be located on top of the petals of a flower or on a cotton ball. It is in Elastic form. Graphene Aerogel is called by Guinness World Record as "the least dense 3-D printed structure". 3-D printed graphene aerogel weighs 0.5 milligrams per cubic centimeter. The important properties that give the material many applications for better electronics, batteries, or semiconductors. Graphene Aerogel can be formed from diverse methods which leads to the materials with improved and updated properties and characteristics for instance:

Aero-Graphene has carbon nanotube supports on the inside. Remarkably, Aerogel can easily withstand 14,000 times of its personal weight, of which carbon nanotubes displays the double. It’s so less density that its blocks can be well-adjusted on plant structures (e.g., flowers and grasses) and small plants. It is world’s lightest material, which is extra-ordinarily low in density which is 12.5 mg/cm3 and its Electrical conductivity is 1-10x10-4 S cm-1. There are 2 Approximate Dimensions. One is 850mg-Rectangular Shape with a Width of 6.6cm (2.6 inches), Height of 1.3cm (0.52 inches) and, Length of 7.1cm (2.8 inches). The second is 75mg/100mg-Round Shape with a height of 1.5cm (0.6 inches) and a diameter of 2.3 cm (0.9 inches).

Due to their remarkable properties, they can be used in an entire range of usages like, in electrochemical power sources as electrodes and, in air purification as super-capacitors, in the removal of some dyes and oils from the water and generally in wastewater management, and also used as solar light photo-catalysts. Common applications include, prevention of corrosion under insulation, uses in imaging devices, thermal breaks, condensation control, optics, light guides, architectural lighting panels, outdoor and sports gear and clothing, increasing the thermal performance of energy-saving materials and sustainable products for buildings used as phase change materials because of improved cooling-heating responses, acting as a high-performance additive to coatings and more. Frequently, the application possibility is upgraded, due to addition of nanoparticle that up-grades their already remarkable properties. Nitrogen-doped Graphene Aerogel which is a 3D Nano-structure is one of a very interesting type of doped Graphene Aerogel due to its lithium storage, transportation rate of Li+, and, mechanical properties, so these materials are commonly used as electrodes.

Aero-Graphene is ideal for energy storage applications because of its extremely high surface area, superior mechanical properties, and, high electrical conductivity. Zhang et al informed the making of electrically conductive and mechanically strong Graphene Aerogel. The Graphene Aerogels exhibit a specific capacitance and can be used for electrochemical power sources as electrodes. Qiu et al has informed about the production of TiO2/GA composite materials. These materials were studied for lithium-ion batteries as electrodes and for solar Light photo-catalysts. The reason for this is that Graphene Aerogels can absorb organic pollutants and facilitate multi-dimensional electron transport. The final product had a high C/O molar ratio (69.9) that makes this product an excellent applicant for supercapacitor usages. The final aerogel, exhibited capability of high rate at remarkable cyclic stability and high current densities, as an electrode material,

Ren et al advised a cheap method for fabricating a graphene sheet network with a 3D free-standing Graphene Aerogels/nickel nanoparticle. The final product can be useful in ethanol cells of fuel, as at 6 mA cm2, it shows us a current density of high peak. The final product comprises 3 important characteristics: Firstly, high current loads that is confirmed by high electrical conductivity, Secondly, maximum accessibility for catalysts is enabled by the 3D porous graphene network and mass transfer of reactants are enhanced and Thirdly, Good catalytic Activity of Ni nanoparticles for ethanol electro-oxidation.

What makes this material perfect for applications of supercapacitors is that the Graphene Aerogel has a high C/O molar ratio (69.9). These supercapacitors with high areal energy density are very promising for those applications with a limited available surface area. For example, wearable energy-storage devices because of the limited total surface area of the human body. These supercapacitors also have the potential to be applied to electric vehicles because of their impressive electrochemical performance even at super-high mass loadings. Also, the electrodes they have fabricated thus far are symmetric, meaning the electrodes are made from the same material. When asymmetric supercapacitors are fabricated using different materials for the two electrodes, energy densities can be further improved, leading to higher working voltages and energy densities. Batteries that are constructed using Aero-Graphene can provide significant power while being very small.

The aerogel can be directly used as an electrochemical sensor, different from the glassy carbon electrode’s traditional modification with the graphene. The aerogel electrode demonstrates satisfying electro-catalytic performances in the detection of H2O2 with fast response, good repeatability, and low detection limit. This work will propose a novel strategy for the applications of graphene in the fields of electro-analysis and sensing. The Nitrogen Doped Graphene Aerogel displayed a density of 1.9 mg cm, and having high absorption ability of oil, fire resistance, high conductivity and, mechanical stability that makes aerogel a perfect candidate for electrochemical sensors as electrode material.

As we know, this is the least dense solid so its low density, in combination with the Graphene sheet’s Hydro-phobic properties, makes Graphene Aerogel, best for absorbing the oil. The absorption capacity approaches two orders of magnitude (or several hundred times) higher than that of commercially-available materials for environmental cleanup. Aero-graphene has potential applications in cleaning up the oil spills, because of its capability to absorb 900 times of its oil weight. It’s also used to collect dust from the comets tails. It helps a lot in the absorption of organic pollutants and Oil. They are also used in wastewater management and disposal.

Thus Graphene Aerogel is the least dense solid in existence. It is remarkable that the Aerogel can also absorb more than almost 850 times its personal weight and can withstand 14,000 times its personal weight. Thanks to the high surface area, higher specific capacitance, higher electrical conductivity, higher mechanical strength, and higher absorption capacity for organic solvents, and inorganic ions, their main usage is Storage of Energy and Environmental Protection. They are used in many applications as, in electro-chemical power sources as electrodes, also as the super-capacitors and so on.