Though carbon has quite a few allotropes, one of the most remarkable ones is graphene. It possesses some outstanding and remarkably very strong properties which make it one of a kind. It is one of the most essential elements of everyday life.

Carbon is a very strong atom and in comparison, graphite is potentially strong too. The process of graphene radiation shielding is excessively very useful to make things handy. Electromagnetic radiations being a daily life essential need graphene to speed up their mechanisms so that all the activities can be performed effectively in due time, as a result, causing a huge help to all the industries and fields associated with it.

Graphene is a single atom layer which is arranged in a 2-dimensional honeycomb lattice. It is carbon's allotrope. The word 'graphite' means portmanteau and 'ene’ indicates that graphite consists of stacked graphene layers. Through σ-bond, each graphene’s atom is linked to its closest 3 neighbors and provides an electron to the conduction band which is extending over the whole sheet. In polycyclic aromatic hydrocarbons, glassy carbon, carbon nanotubes, and fullerenes, the bonding is of the same type. Graphene is a semimetal having rare electronic characteristics because of these conduction bands. Massless relativistic particle theories describe the electrical characteristics of graphene in the best way possible.

In graphene, linear is showed by the charge carriers instead of quadratic, energy's dependence on momentum, and with graphene, field-effect transistors can be made, capable of showing bipolar conduction. Over long distances, the transport of charge is ballistic, leading to the material displaying nonlinear and large diamagnetism and large quantum oscillations. Electricity and heat are very efficiently conducted by graphene along its plane. Graphite's black color is due to the capability of the material to absorb the light of all the visible wavelengths; still, a single sheet of graphene is closely transparent due to its extreme thinness. As compared to steel which is strongest and has the same thickness as it, this material is still 100 folds more strong.

For ages, the theories for graphene are being made by scientists and it's being made in lesser quantities for so many centuries without knowing what it is by using pencils and some other similar graphite applications. In 1962, through an electronic microscope, it was observed originally, but it's only studied when supported on the surface of the metal, later in 2004, it was separated and characterized by Konstantin Novoselov and Andre Geim, winner in 2010 of Nobel Prize In Physics, from University of Manchester because of their study on the material. Surprisingly, graphene of high quality was easy to isolate and it was easy to disperse graphene in water. It was attained to create bio-interfacing and conductive patterns.

It is recommended by IUPAC to use the name 'graphene' when the individual layer's characteristics, structure, or reactions are being discussed. The word ‘graphite‘ should be used for the 3-dimensional material. If the layer is isolated from its environment, including those layers that are transferred or suspended to silicon carbide or silicon dioxide, it is known as free-standing or isolated graphene.

The graphene’s 2-dimensional density is 0.763 mg per square meter. The young modulus of graphene is near 1 TPA (150,000,000 psi). The strongest material which is ever being under tests is Graphene, having 130 GPa of the intrinsic tensile strength (19,000,000 psi). It has an engineering tensile strength of 50-60 GPa to stretch the large-area freestanding graphene. As illustrated by the Nobel announcement, a 4kg cat would be supported by a 1 square meter graphene hammock but that hammock’s weight would be like the cat's one whiskers, at 0.77 mg (about 0.001% of the weight of 1 m2 of paper). With negligible strain, graphene monolayer having large-angle-bent has been obtained, displaying the 2-D carbon nanostructure’s mechanical robustness. The mobility of the monolayer graphene will stay preserved even after extreme deformation.

Through the usage of an AFM (Atomic Force Microscope), the suspended graphene sheet’s spring constant is measured. Over the 2 cavities of SiO, the sheets of Graphene were suspended, and the stress was applied to the sheet using an AFM tip for testing its mechanical characteristics. As compared to the bulk graphite, it has a stiffness of 0.5 TPA, and the spring constant was of the range 1–5 N/m. These characteristics can result in the applications, for instance, NEMS as resonators and pressure sensors. The flat sheets of graphene are unstable when it comes to scrolling because of its large surface energy, for instance, when it is being bent into the shape of a cylinder, which is its lower state of energy, it is unstable.

Due to the effects of radiation on the health of humans, radiation shielding is a significant subject for years when it comes to scientific investigations, therefore it is the scientists' first approach, keeping the minimal level of radiation with optimum materials. For the selection of material, the determinant parameters are the cost, mass, size, and efficiency, etc., and not the one which can function as a barrier because any material can be a barrier against X- or gamma rays. These days, for radiation shielding, the most usually used materials are concrete, copper, tin, and lead.

One of the carbon's special forms, graphene, comes in the weak radiation absorber category because of the low value of atomic number it possesses, Z=6, which is nothing to be surprised of, as its thickness is of only one layer of atoms.

It is shown in the latest studies that when graphene is in its multilayered form, it can be utilized as a radiation shield, graphene slab. In graphene slab, there are single layers, over a dozen thousands. Its thickness is almost 10 μm. In short, due to being a huge issue for both future technology and humans, radiation is a big concern, making radiation shielding an important technological issue. Also, due to its low cost of manufacturing, high absorption efficiency, and lightweight, in comparison with other optional shielding materials, now graphene is the projected shielding material.

Usually, the Terahertz electromagnetic radiation is defined in 0.1-10 THz frequency range, having a growing and huge promising future in various fields, for instance, medicine, imaging, fast sensing, security, and telecommunications. It is possible because of the fast development of detectors and emitters that are operating in the spectrum's terahertz and sub-terahertz parts.

For meeting the increasing demand for wireless ultra-fast systems of data transferring and new functionalities, the future generation electronics and telecommunication needs to shift to THz technology. If no shielding is given, the surrounding space will be filled with the electromagnetic waves (EM) in this range and in the environment, an increase in a not needed electromagnetic pollution will turn into a problem. This is due to the capability of terahertz and sub-terahertz radiation to affect sensitive electronic devices, resulting in them malfunctioning, therefore, affecting human health and living organisms too. Thus, for further development of terahertz technology, the key aspect is effective attenuation – through electromagnetic radiation’s absorption. Today, metals like copper and aluminum, composites, and conductive coating that is based on metal, are the conventional state-of-the-art materials, which are protecting against terahertz. Electromagnetic radiation is shielded by these materials across the spectrum's broad range, including the microwave (gigahertz) range.

Although the mechanism of shielding is based on the free carriers’ interaction in the conductive metallic material with the incoming Electromagnetic waves leading to reflection, leaving the not needed radiation still in the environment. Using polymer-based materials with nano-structures or metallic fillers is an alternative approach as they are capable of displaying effective characteristics of electromagnetic interference (EMI) shielding in the GHz range of 11–13, meanwhile also having beneficial functionalities (weight, light, flexibility). Mostly, reflection is used in the technologies of shielding. 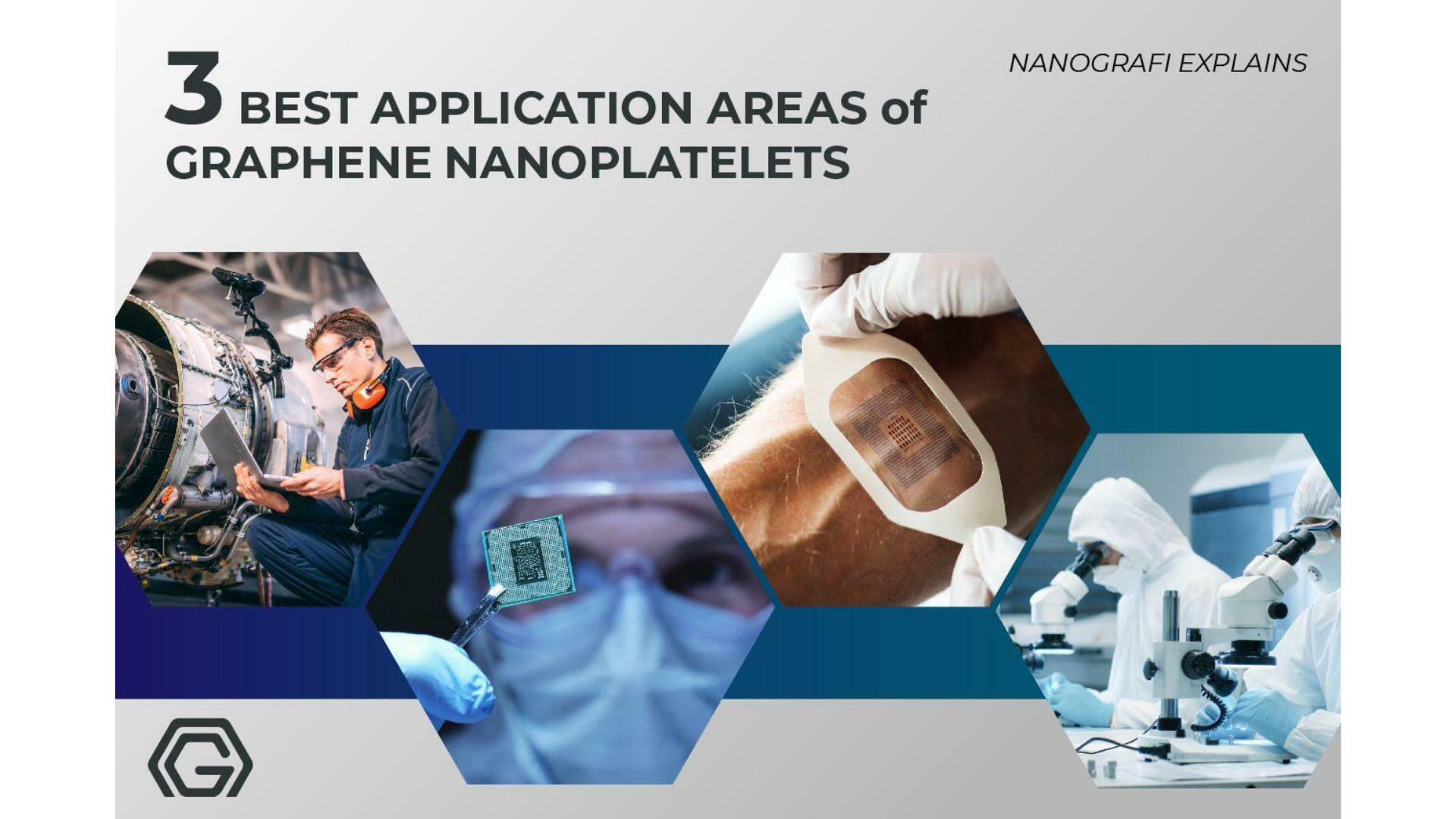 To get more information about graphene and its application areas,

Moreover, the composites that are based on graphite are a remarkable shielding material, with 30 dB or more SE (with >10% high graphite loading). Due to its strong interaction and broadband towards the electromagnetic waves, Graphene is known as a THz absorber. For graphene with a single layer, there is only 1dB attenuation because it provides satisfactory shielding performance through filler distribution in the polymer host for creating a macroscopic network resulting in the composite being electrically conductive, therefore still displaying Shielding functionality like metal-based on reflection mainly.

Not only the selected component is protected by the terahertz and sub-terahertz from the radiation but it also lessens the radiation in the surrounding through efficient absorption. Lightweight and flexible properties are also wanted, for instance, to protect movable or flexible electronics parts. Also, it is beneficial for the shielding material to not being electrically conductive as it helps in preventing the electrical short-cuts which are very important in order to protect the electronic components.

Role of Graphene in Radiation Shielding

Carbon itself is not considered as a radiation shielding material because of its low atomic number, i.e. Z=6. However, the wonder material graphene can offer some considerable radiation absorbing properties. The mechanical strength, remarkable optical characteristics, flexibility, elasticity, saturation velocity, and high conductivity of graphene, makes it a great material of choice for a very high-performance EMI shielding. Graphene is utilized in various forms for EMI shielding applications including the graphene structures that are multi- and mono-layered, functionalized graphene, and composites with different materials. Most of the researches focus on radio frequency shielding and x-ray shielding since these radiations are at the center of attention.

The materials that are based on Graphene include polymer/graphene composites, multi- and monolayers of graphene, and functionalized graphene oxide are utilized in electromagnetic interference shielding applications such as radio wave, x-ray, microwave, and UV shielding.

Radiation is a great part of our lives because of the natural radiation surrounding us and especially because of the electronic devices we use daily. Natural radiation including radiation from our bodies and background radiation is inescapable and harmless. However, the radiation we are exposed to because of electronic devices increases constantly and is considered to be harmful. Radiation, which is also referred to as electromagnetic waves, is defined as energy coming from a source and traveling through space at light's speed. A wave-like behavior is possessed by this energy, creating an electric and magnetic field.

The electromagnetic spectrum is used to describe the entire range of radiation that exists. Electromagnetic radiation is classified into categories based on the frequency of the waves. These categories can be listed from low frequency to high frequency as X-rays, visible light, microwave, gamma rays, UV, infrared, and radio waves. Radiation types are also categorized as non-ionizing and ionizing radiation. The formation of charged particles is caused by ionizing radiation due to their high energy. X-rays and gamma rays belong to the ionizing radiation category. The major radiation types caused by technological devices are x-rays and radio waves. Medical imaging devices are the source of x-ray radiation while electronic devices such as TVs are the source of radio waves.