These composite materials are utilized in various application areas including the automotive and aerospace industry, wastewater treatment, food packaging, and pharmaceutical industry. Clay is one of the most important natural materials used in industrial applications. Its low cost, environmentally friendly chemistry, and abundance make clay a desirable material. With the rise of nanotechnology, nanoclay has also attracted great interest.

Nanoclays are abundantly found in nature worldwide and commonly occur due to the chemical weathering of silicate minerals at the surface of the earth. Nanoclays can be separated from the clay fraction by a combination of several different physical separation techniques. Clay minerals consist of a silica tetrahedral sheet (SiO4) and an alumina octahedral sheet (AlO3(OH)3). The structural layers are stacked together through intermolecular forces which mainly include Van der Waals forces, hydrogen bonding, and electrostatic forces. Because of these weak interactions between the layers, an interlayer is formed between clay sheets. The interlayers can be intercalated by water, organic cations, and polar organic liquids causing the clay lattice to expand. Each clay layer is composed of octahedral and/or tetrahedral sheets. Tetrahedral sheets consist of silicon-oxygen tetrahedrons which are linked together at three corners. In a clay layer, tetrahedral sheets are in six-fold coordination with octahedral sheets which consist of aluminum and magnesium.

Like it was mentioned before, halloysite shows a 1:1 sheet arrangement. The chemical formula of halloysite nanoclays is reported as Al2Si2O5(OH)4, which corresponds to a composition of 20.90% aluminum, 21.76% silicon, and 1.56% hydrogen. These nanostructures are often formed by hydrothermal processes naturally faced by alumina-silicate minerals. Halloysite shows a multi-walled structure, and each wall is composed of 10-15 aluminosilicate sheets. In nature, halloysite is predominantly found in tubular shape which is often referred to as halloysite nanotubes (HNTs). The diameter of these structures ranges between 50 to 60 nm while the length ranges between 0.5 to 10 µm. HNTs are widely utilized in ceramic products to improve mechanical properties. Nowadays, these materials also attract attention in nanotechnology applications such as contaminant absorption, drug delivery, catalysts, and polymer reinforcement because of their high surface area and attractive mechanical properties.

Polymers have become one of the most important materials in industrial applications replacing some of the traditional materials such as ceramics and metals. Their adjustable properties and varying chemical nature make them desirable materials in several different industries. Composites of polymeric materials also attract attention because of their enhanced mechanical, electronic, chemical, and optical properties. Nanoclays are suggested as one of the suitable filler or additive materials for polymer composites. As it was mentioned earlier, halloysite and montmorillonite are the most commonly utilized nanoclays in polymer / nanoclay composites. The hollow structure of the halloysite makes it a great carrier material for various chemical molecules. Thus, HNTs act as great fillers in polymers and can be effectively used for the controlled release of active materials such as s flame-retardants, antioxidants, anticorrosion and antimicrobial agents. The surface of the halloysite nanoclay is mostly composed of SiO2 molecules. Hence halloysite is easily dispersible in various polymeric matrices without the need for surface functionalization. Montmorillonite attracts attention as a filler material because of its high surface area (700-800 m2 /g) and large aspect ratio. This material shows good mechanical strength and assumes a rigid structure and inhibits the free movement of polymer chains when dispersed in polymeric materials. Thus, montmorillonite is reported to be a great reinforcing agent for polymer composites.

During the preparation process of nanoclay / polymer composites, homogenous dispersion of the nanoclay in the polymer matrix and the compatibility of the constituent materials are the most important yet challenging factors. These factors majorly affect the properties of polymer / nanoclay composites. The dispersion of nanoclays in the polymer matrix and the chemical compatibility affect the morphology of the composite, which in turn changes the strength, elastic modulus, thermal stability, heat distortion temperature, self-healing, shape memory, and gas barrier abilities. Different dispersion techniques can be utilized to achieve a more homogenous dispersion based on the type of nanoclay material. The most commonly utilized technique is the surface functionalization of the clay material. 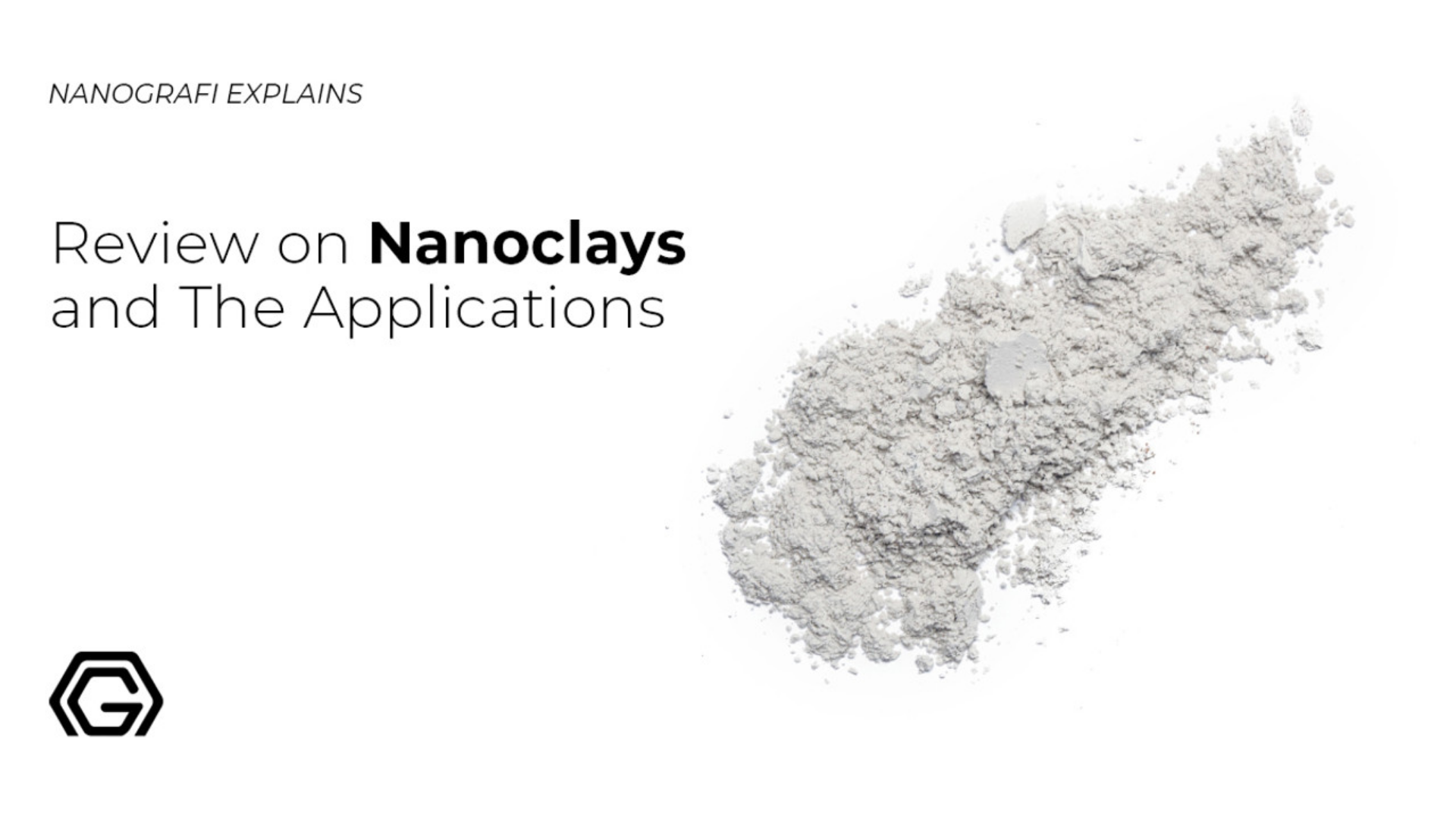 To learn more, you can read Review on Nanoclays and the Applications.

Several different synthesis methods have been investigated for nanoclay / polymer composite production. The melt blending method, solution blending method, and in-situ polymerization method are amongst the most popular processes. Each preparation method provides different advantages and disadvantages. For example, the solution blending method can provide better clay dispersion due to low viscosity and high agitation power. However, this method is rather complex. On the other hand, the melt-blending method is much more suitable for industrial production, eco-friendly, and economic. The in-situ polymerization method is preferred because it allows easy control of the composite properties.

The solution blending method is a solvent-based process that involves the use of a solvent that is suitable for both the polymer and nanoclay. This solvent is often water, chloroform, or toluene. This process is mostly carried out in three steps: dispersion of clay, solvent removal, and casting. Clay layers swell in the solvent allowing a suitable environment for intercalation. For nanoclay dispersion, the mixing process is usually carried out by using stirring, reflux, and shear mixing operations. However, sonication has recently attracted attention as an effective mixing operation. Polymer chains displace the solvent material in the interlayers of nanoclay intercalating the clay structure. Then, the solvent material is removed by vaporization or precipitation and intercalated sheets reassemble forming the composite material. Nanoclay contents, sonication type (bath or tip), solvent type, and sonication time are the most important parameters affecting the nanoclay dispersion in the polymer solution. Ultrasonication is applicable for processing both thermoplastic and thermoset polymers. Two major drawbacks are reported for the solution blending method. First, the significant amount of solvent used in this process makes upscaling for industrial manufacturing unfeasible and causes concerns in terms of environmental safety. Second, this method can only be used for specific solvent, polymer, and nanoclay combinations. Hence, the solution blending method is mostly limited to small-batch experiments.

The pharmaceutical industry utilizes the unique properties of polymer / nanoclay composites, including their swelling and rheological properties, high retention capacities, large surface area to volume ratio, and affinity for interaction with biopolymers. They are found to be useful, especially in tissue engineering, drug delivery, gene therapy, and food preservation. High retention capacity can be of asset to targeted drug delivery and gene therapy applications. The porous structure of these composites and nanoclay / hydrogel composites are reported to show great potential in tissue engineering. Several different nanoclay and polymer combinations have been investigated and characterized for pharmaceutical purposes.

As the role of packaging in the food industry has gained importance, developments in food packaging materials have accelerated. Packaging technologies are utilized to extend the product's shelf life. Nanoclay / polymer composites are utilized for durable packaging materials utilizing their improved mechanical, thermal, and optical properties. They also act as a barrier against oxygen, carbon dioxide, water vapors, and volatile compounds (flavors and taints) extending the shelf life of the product and preserving the flavors. Nanoclay / polymer composites can also allow the permeation of selected gasses which results in better shelf life and food preservation. Amongst the different nanoclay types, montmorillonite and organo-montmorillonite have especially attracted attention in food packaging applications because of their high surface area with fairly large aspect ratio, and good compatibility with most organic thermoplastics. 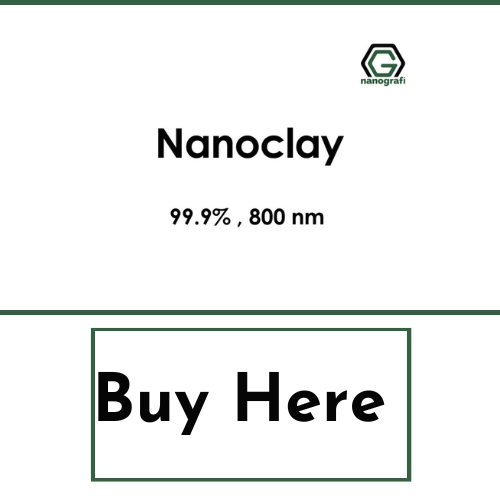 Clay has been one of the most important natural additives from the moment of its discovery. Its natural abundance and attractive thermal and mechanical properties have attracted attention in industrial applications. With the rise of nanotechnology, nano-sized clay particles have also attracted great interest. Halloysite and montmorillonite nanoparticles are the most widely utilized nanoclay types in studies and industrial applications. Halloysite is mostly found in a tubular structure with a 1:1 sheet arrangement. Due to its hollow structure, the halloysite shows great loading capacities and mechanical strength. On the other hand, montmorillonite has a flat structure with a 2:1 sheet arrangement. Nanoclays are often utilized as filler materials in the composite structure. Recently, nanoclay / polymer composites have become a topic of attention because of their enhanced mechanical, electronic, chemical, and optical properties. Halloysite and montmorillonite nanoclays are heavily used for nanoclay / polymer composite synthesis. The most important factors to take into consideration during nanoclay / polymer composite synthesis are effective nanoclay dispersion in the polymer matrix and the compatibility of the polymer and nanoclay. To achieve desirable composite properties and improved nanoclay dispersion, several different synthesis methods have been developed. The most commonly utilized synthesis methods include melt blending, solution blending, and in-situ polymerization method. Each synthesis method shows different advantages and disadvantages. The melt blending method is the most suitable method for large-scale manufacturing; however, it provides low nanoclay dispersion. The solution blending method allows great nanoclay dispersion; however, it involves excessive amounts of solvent use which makes this production method high-cost and harmful to the environment. The in-situ polymerization method offers great nanoclay dispersion and control over the composite properties. However, this method is still in its infancy and requires further development for large-scale manufacturing. Nanoclay / polymer composites are utilized in several different applications because of their low density, high damping, high specific strength and stiffness, high fatigue endurance, high absorption capacity, selective gas permeability, and enhanced thermal behavior. The most important application areas of nanoclay / polymer composites are the automotive and aerospace industry, wastewater treatment, food packaging, and the pharmaceutical industry. Studies show that nanoclay / polymer composites show great potential for further development and different application areas.

To discover the latest articles in nanoclay - polymer composites, you can visit Blografi.